There are things men shouldn’t say to their women. Many times, men just say things without putting a woman’s feelings into consideration. Then they go around saying that women are complex beings.

As a man, there are certain questions, phrases and demands you should never utter to a woman — whether it’s how many men they have been with sexually, how much sex they love to have, or anything about their weight.

Here are 10 things men shouldn’t say to their women.

How many men have you been with? 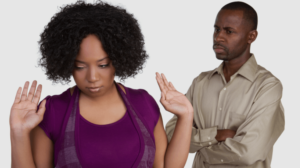 Do you want to come back to my place?

Why do you look so fat?

The moment you tell a woman she looks fat, you have damaged something in her. Many women silently battle with insecurities even though they don’t wish to admit it to themselves. But telling her something negative about her size makes her lose more confidence in herself. You don’t make fun about a woman’s weight, it hurts. You don’t know the battles they are fighting to maintain their weight.

When are you going to meet my family?

Meeting a man’s family is a huge deal for many women. It can often make or break a relationship depending on how they accept her or not, and women view the moment as the next huge step in a relationship. It’s a huge step and one that guys don’t necessarily understand the importance of because we tend to do it more often than women.

You look awful in that outfit

Men make jokes or just openly complain about the amount of time a woman spends getting ready. It’s not as if she’s running around in circles and then five minutes before it’s time to leave she starts putting herself together. Looking good takes time and women spend a good portion of that time in preparation — from picking out clothes and shoes to the color of her hair and nails. Even the best of preparation doesn’t ensure she’ll be happy with the result. Saying she looks bad in an outfit shows zero consideration for all her efforts to make herself beautiful for you.

Even if you don’t like her friends, you can’t force her to severe her relationship with them. In fact, she doesn’t really like your friends, but she probably won’t come right out and say it. Unless the women she spends time with are horrible influences on her life, or do things to jeopardize your relationship, there is really nothing you can do about her circle of friends.

What do you expect her to say? She would say yes if she likes you even though you are a horrible kisser. But if she doesn’t give a damn about you, she would tell you no and you know what a blow that would be to your ego. It will shatter it to pieces.

She’s not your mom. She’s your girlfriend. You don’t expect her to cook like your mom. That’s disrespectful and rude. Take her for who she is and how she cooks and stop comparing her to your mom. It will hurt her. She will feel maybe she’s not enough for you.

This is what my ex-girlfriend used to do in bed

”My ex-girlfriend used to do this in bed. Can you do it?” We all have our sexual fetishes, but there’s no reason to emotionally blackmail your partner to do them especially if you both just started dating. A guy just can’t say to his current lover that his former lover did a certain thing, it turned him on, and therefore he wants her to start doing it. Nothing kills the mood faster than making her think about your ex-girlfriend.

Are you sure it’s mine?

This is the most hurting thing you can say to a woman you have been intimate with without protection and she ends up pregnant. What were you expecting, a doll?

His uncle raped his sister and here’s how he got…

What do young men bring into marriages these days?