An insecure man has no business being in a marriage

An insecure, emotionally immature man has no business being in a marriage. Marriage is not for children in adult bodies. You can’t claim to be a man and be throwing tantrums all over the place because you want to force your wife into doing your bidding.

If as a man, you resort to emotional blackmail and religious subjugation just to get your wife to agree with you, you are an insecure boy in a man’s body. You can’t go about demanding for submission from your wife when you are not ready to play your own part first. What do you think she is, a robot?

Many Nigerian women are in hell they call marriages because they ended up with babies. These women have the misfortune of dealing with men who claim the head whenever it is convenient and then demand submission from them too when they want to feel all powerful. 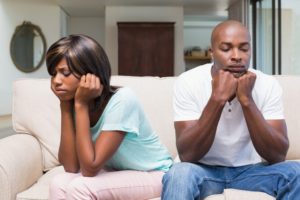 Dear women, if your husband or boyfriend is exhibiting any of the behaviour listed below, he’s an insecure man. You need to stand your ground, otherwise, you will be reduced to nothing.

A mature man is someone you don’t really have to worry about, whereas the insecure man can be embarrassing. He’s may drink too much at the office party, insult your family members and even talk down on you before your neighbours and friends without thinking of your feelings.

3. He is selfish
Mature men put your needs first. Emotionally immature men will ask you to get them things whenever they need them but will not offer bring some for you. He sees taking care of his children as a woman’s job. He won’t life a finger to help you with house chores even if you are almost dying doing them. If he buys you a birthday present, it is to blackmail you later on with it.

4. He is emotionally unavailable
Insecure men don’t want an adult relationship, they want a party. They bail when you need to lean on them. They can’t commit to doing anything with you because something more fun might turn up. Mature men don’t play games but these insecure, baby men play games even with your life without a care in the world.

5. He is never wrong

He thinks he’s always right. If he loses a job, it’s because the boss has it in for him, not because he didn’t take his job seriously. He will even blame you for his job and business losses or blame the curse in the family for wanting him to fail in life. He blames you for anything that goes wrong in your relationship.

6. He uses you to cover up his failures

Insecure men want to look big to outsiders even though many of them don’t want to work hard to achieve something in life. They will want their wives to buy things and tell everyone they bought it even though they don’t contribute a dime to their family’s upkeep. Everything the woman does must be attributed to them just to make them feel like a man.

7. He holds grudges
He’ll make the smallest mistake into a big deal and never let you forget it. He will bring it up in every argument and laugh about it in social situations. He will even involve your family members over little disagreements, threaten to quit the marriage and demand unrealistic things from you just to feel powerful.

9. He belittles you
They make you the butt of jokes and bolster their own egos by putting you down. They make your job sound unimportant and make fun of your intelligence—perhaps, rightly so if you are willing to put up with that nonsense.
10. He has no interest in your dreams

Many Nigerian women can’t do the jobs they love because their husbands refuse them to work. Many can’t even pursue their careers because their insecure men feel threatened by their brilliance and drive. They bring them down by quoting culture and tradition or use the Bible to whip them in line.

Why many Nigerian women are living a lie

Any man calling a woman a gold digger doesn’t have…

Maya Angelou becomes first Black woman to appear on a US…