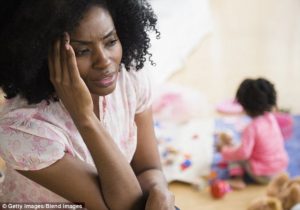 Depression is not a joke. Twice last year, I came very close to walking away and never coming back. And when I say it, people will hush me and tell me to deal with my problems.

I remember I reached out to someone, and she laughed at me. She told me that I was so weak. She said I wasn’t the only one with problems that I should suck it in. Something died in me. I withdrew the more.

Things went from bad to worse. I became dark. And whenever people commented on my complexion, I would tell them I was stressed because I didn’t want to be laughed at. It wasn’t stress, I was depressed.

No cream I tried worked. I tried new soaps too but none worked. At a point, I stopped using cream because it wasn’t working. It was like my skin was bent on revealing to the world that I was in a very dark place. I just couldn’t say anything to anyone. I kept internalizing my feelings until it got to suicidal thoughts.

I will just stay and say to myself, if I go away now, won’t all these problems end? I was struggling to stay alive. It was as if I was in a dark room and someone was suffocating me with a dark cloth too.

My job suffered too. I was making so many mistakes in my writings. I found it hard to string sentences together. Things that came naturally to me became chores. It was hard doing things I previously enjoyed.

I always fought the feelings of hopelessness, disappointment in myself and others as well as helplessness. Facing everyday was like hard labour. Little things trigger tears and emotions in me then.

Sometimes, the only thing I held unto was my daughter. The thought of leaving her alone made me fight my demons. I fought and fought. Whenever those thoughts creep in, I would start telling myself to never give up.

And then, I reached out again to OloriKemmy Ola, who started talking with me. She would check up on me and tell me to hold on. I don’t take that for granted.

I won’t forget the hugs Oluwasijibomi Oyedepo Ade-Tayo gave me at work during one of my episodes. Hot tears started falling down my face. She held me and kept telling me to trust God that everything would be fine.

I am grateful to Ebele Jeanie, and Moyo Jegede Abatan who at different times listened to me. They stood with me in solidarity. They upheld me with prayers too. They checked up on me telling me how much I am loved.

I won’t also forget how my primary school classmate took up my case. He became my friend. He would call me, tell me to stop feeling hopeless and tell me that I am not going anywhere until we grow old together.

He would tell me to remember how he loves annoying me whenever I start feeling blue. His words, encouragement, annoying jokes, and unusual calls lifted me out of that horrible, dark, and suffocating pit.

Why am I saying all these?

If someone reaches out to you about their dark thoughts, don’t tell them to suck it up.

Don’t tell them to pray more. Prayer is the last thing on a depressed person’s mind.

Don’t tell them to go for deliverance that it’s a spiritual attack.

Don’t tell them you are going through worse problems. It is not a competition.

Don’t tell them to suck it in and be strong. If they are strong, they won’t come to you for help.

Don’t use their issue to start gossiping. Don’t use someone’s challenge as a topic of discussion in your neighborhood.

Listen to them. Be there for them. No matter how insignificant you think their issues are, listen.

Don’t judge them. Don’t taunt them. Don’t laugh at them. Don’t push them aside. Just listen and if you don’t know what to tell them, refer them to a professional.

Depression thrives on feelings on helplessness, hopelessness and not seeing a way out.

Save a life. Be kind. Don’t judge. Don’t criticize.