Nigerian lady brutalised by policemen for having tattoos

A Nigerian lady, Chioma Pius was recently brutalised by men of the Nigerian police force for having tattoos.

The young lady, armed pictures of her bruises took to Facebook to narrate what happened. She calls the experience the worst day of her life.

“Today was a horrible day. It’s the worst day of my life.

I was brutalized by police officers. This happened at emohua axis of river state, at the highway leading to Bayelsa. My crime was that I tattooed my body.

A police officer asked me to step down from the taxi I was traveling with from Bayelsa to port harcourt.

I gladly introduced myself after which i had a big smile on my face and my phone rang but I couldn’t answer.

I was called a cultist, prostitute, armed robber. There’s no disgusting name these men didn’t call me and all this time I was just laughing and telling them am not entering their mobile cell.

They seized my phone’s so I couldn’t record them. They searched my purse and when they couldn’t find any money, they got more angry.

They said that I don’t even have money and am showing myself. Before I knew it, one of the officers grabbed me by my trousers and pushed me to the van. The other guy slapped me and punched me repeatedly.

I was asking why they are beating me up and their boss used his gun to hit me on my thighs. He went away came back with cane and was flogging me and calling me names. They pushed me into their cell.

During the struggle, I lost my ring and while this was happening, they were collecting money from highway drivers and letting them through without searching them. 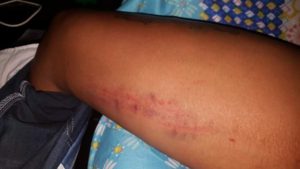 These guys are animals. They touched the wrong one. They will not go unpunished. They sent away my taxi driver. Passers by were watching it couldn’t do anything.

I will not be humiliated for no reason. These police officers are not here to protect us but only to hurt innocent ones but its enough what’s wrong with one tattooing their body?”

Written by Chioma Pius who was brutalised by some policemen for having tattoos.

How to overcome self doubt and be successful

Irresistible qualities of the new woman in Nigeria

The man that can resist sexual temptation has not been born…

10 ways having an estranged family affects your marriage