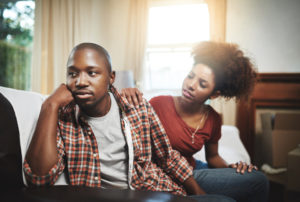 Many women are unaware that they are in verbally abusive relationships. The idea that women are the ones with caustic tongues has been disproved by men who are verbally abusing their women.

Nigerian women should look out for subtle signs of relationship abuse. Abuse is not love. And if you are an emotionally abusive girlfriend to your man, stop it. Stop hurting him. Stop damaging another person’s child all in the name of love.

If you are looking for how to stop the cycle of abuse, you have to be able to first identify the signs of abusive relationships. Below are 10 signs of verbal abuse women shouldn’t tolerate in relationships.

Your partner calls you unprintable names

Name calling is an abusive behaviour. It’s one thing to call someone foolish in the heat of an argument. It’s another to use hurtful names on a regular basis, especially ones that are very personal and that eat away the self esteem of your partner.

You are careful with the things you say

Your partner makes you apologize all the time

It is good to apologize when you have done something wrong but people being verbally abused apologize for things they didn’t do. Verbally abusive partners blame their partners when things go wrong and they can be convincing about it. Even when something isn’t your fault, you start apologizing just to avoid being called names.

Your partner blames you for his unhappiness

Aside 10 signs of an emotionally abusive relationship, a verbally abusive partner doesn’t take responsibility for their feelings or actions. When your partner starts blaming you for their bad behavior, he is abusing you. Adults have to take responsibility for their behaviors and if your partner is saying that you made them do something, verbal abuse cycle is present in your relationship.

When you argue with your partner, you may feel bad about it afterwards especially when they abuse, yell and berate you. In verbally abusive relationships, people often feel guilty after verbal attacks from their partner even in the absence of any rational reason for the guilt. This is due to the shaming effect of constant verbal abuse.

Your partner accuses you of cheating

Constant accusations from your partner imply that they may be insecure or guilty of some bad behavior. And when your abuser feels jealous, the verbal abuse might include false accusations of infidelity or flirtation and threats to break up with you. Take emotional abuse test from time to time to know how where you stand in your relationship.

Your partner makes fun of you

Constant poking from your partner is a behavior that is meant to cut you down and reduce your self esteem. If your partner talks badly about you in front of your family, your friends, or their friends while you are present or absent without acres, this is a sign of verbal abuse.

Your partner makes you feel out of touch with reality

After arguing with your partner, do you ever feel so manipulated you don’t know what’s real or not? This is a form of manipulation that leads the abuser to feel they are losing a grip on reality. Your abuser may claim that you are being too sensitive or accuse you of seeing things that aren’t there.

Your partner makes you feel stupid

If you walk away from an argument with your partner feeling belittled, this is definitely a sign of some sort of emotional abuse. When your partner takes cheap shots at your intelligence so they can feel better about themselves, they want to degrade you. You deserve to be in a relationship that makes you feel great about yourself and not less than you are.

Your partner devalues your thoughts

If your partner is constantly opposing or devaluing your thoughts, perceptive or experience, they are verbally abusing you. They are always saying how unintelligent you are or how you don’t know what you are saying. They believe they are better than you and you should keep quiet when issues are raised.