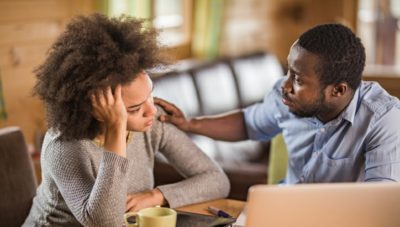 Women are told to pay the price for their husbands fidelity

Your family tells you that you have to do everything possible to make sure that you keep your husband at home.

You are admonished to cook his favorite dishes all the time so that he won’t eat a strange woman’s food and get entangled in her web of deceit. They make it look as if it is your duty to keep your husband faithful to you.

You are told to clean your house and make sure you take care of your husband like a child so that he doesn’t look outside and start cheating on you. They even tell you he’s your first child whenever he’s misbehaving so you have to be careful with him. Rolls eyes.

Women are held responsible for the irresponsible behaviour of their men as if these men don’t have brains or sense.

Women are told to pay the price so that their men can be faithful to them and they can enjoy their marriages as if these men jump into fire when they see one. Why should women be responsible for men’s infidelity?

And one of the price you should pay as a Nigerian woman with an irresponsible and cheating husband is prayer. You are hounded by family, friends and church members to pray for your cheating husband.

Women are told to pay the price for their husbands fidelity

Nobody is talking about how cheating men are exposing their wives to the wrath of slimy and dangerous side chicks who may start seeing these wives as rivals and start scheming how to get rid of them.

Nobody is talking about how these cheating men are disrespecting their wives by running after women with different shapes and sizes but they expect the women being cheated on to pay the price of keeping their husbands penises in their pants.

What kind of society encourages irresponsibility in one gender and then blames the other gender for not paying the price to keep the erring gender in check? That’s bull crap!

One pastor told a woman who came to report her husband’s philandering behaviour that she’s disturbing herself for nothing. He told her that she should be ready to pay the price to get her husband back from the grip of immorality.

This pastor told her that she should start fasting and prayer for her husband that has been cheating on his wife throughout the period of their marriage so that God can change his heart.

He told this hurting woman that she should do everything possible to keep her home so that her husband’s many side chicks won’t defeat her by keeping her husband.

He clearly avoided talking about the pain this man was causing his wife or how his actions were hurting her. He somehow managed to hold this woman responsible for her husband’s misbehaviour and told her to pay the price for an unwilling man .

When this woman asked this pastor if she was the one cheating on her husband for years, would he also advise her husband to pay the price for her fidelity and fast so that she can come to her senses?

Pastor told her that it is an abomination for a woman to cheat on her husband and it is not our culture. Can you imagine? A pastor talking about culture nonsense because the tables were turned.

Dear Nigerian women, don’t allow this society turn you into a moron because they want you to pay the price for a man’s fidelity. You don’t have to do that.

He’s an adult who knows right from wrong. You shouldn’t be held responsible for his irresponsible behaviour and actions. If he’s serious about being a better man, he should pay the price himself by being disciplined.

If a man cannot discipline himself or have self control when it comes to sex, it is not your duty to pay the price for his fidelity. Don’t kill yourself for nothing. You cannot change someone who doesn’t want to change.