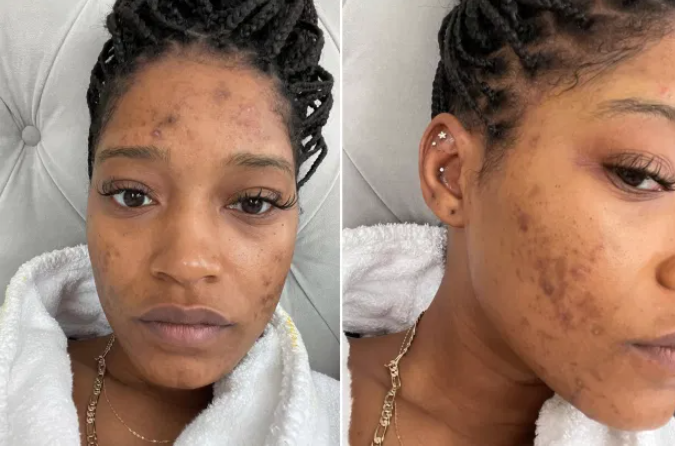 Keke Palmer has been diagnosed with polycystic ovarian syndrome and Nigerian women need to learn what PCOS means and how to identify some of the symptoms.

Keke Palmer opened up about the struggles that come with it by sharing an unfiltered photo of her facial acne.

The 27-year-old revealed that she never knew her PCOS was the cause of her bad acne all along.

On Instagram, she captioned her photos with this educative post about polycystic ovarian syndrome so that women can learn from her struggles with PCOS and acne.

“Poly Cystic Ovarian Syndrome has been attacking me from the inside out my entire life and I had no idea. My acne has been so bad that people in my field offered to pay for me to get it fixed. I tried EVERYTHING.”

“I did all that, I ate all the ‘right’ things, my blood tests were fine. But it took ME taking a personal look into my family that has a history of diabetes and obesity, to understand what was ACTUALLY happening with me,” she continued.

Palmer called out the doctors who wouldn’t listen to her or take her seriously because she didn’t ‘look the part’ of a typical patient, so she took it upon herself to investigate her symptoms.

“I’m posting this to say that it’s okay and we can help ourselves. My skin has made me sad many nights but I do not give up on myself,” she shared.

“I know this is not me and my body has been looking for help. I do not have a medical degree but I did the research and took what I learned to a doctor and that led them to a proper diagnosis.”

Keke Palmer credited her family’s “fight out of poverty” for giving her the access to proper medical treatment. This is why she wants to share candidly her knowledge with those who might not have such privilege.

“The least harmful thing PCOS can bring is acne. To all the people struggling with this please know you’re not alone and that you are still so f–king fine!” she concluded her message.

“MY ACNE AINT NEVER STOPPED ME. But we don’t have accept this. Now I can really help KEKE! And I love her so it’s ON.”

When you have polycystic ovaries, you have a disorder that involves infrequent, irregular or prolonged menstrual periods. You also  often have excess male hormone (androgen) levels.

In addition, your ovaries develop numerous small collections of fluid called follicles and may fail to regularly release eggs.

PCOS is a serious health condition some Nigerian women suffer from. Women with PCOS are more likely to develop certain health problems which include type 2 diabetes, high blood pressure, problems with the heart and blood vessels, and uterine cancer. These women also often have problems with their ability to get pregnant (fertility).

Polycystic ovary syndrome shouldn’t be left untreated. Nigerian women shouldn’t joke with their reproductive health by ignoring this health condition. This is because if left untreated, PCOS can increase the risk for endometrial cancer.

The symptoms of this condition often develops around the time of the first menstrual period during puberty. Sometimes, it develops later. The symptoms are severe in obese women.

Signs and symptoms vary. A diagnosis of Polycystic Ovarian Syndrome is made when you experience at least two of these signs:

Infrequent, irregular or prolonged menstrual cycles are the most common sign of PCOS. For example, you might have fewer than nine periods a year, more than 35 days between periods and abnormally heavy periods.

Elevated levels of male hormones may result in physical signs, such as excess facial and body hair and occasionally severe acne and baldness.

Your ovaries might be enlarged and contain follicles that surround the eggs. As a result, the ovaries might fail to function regularly.