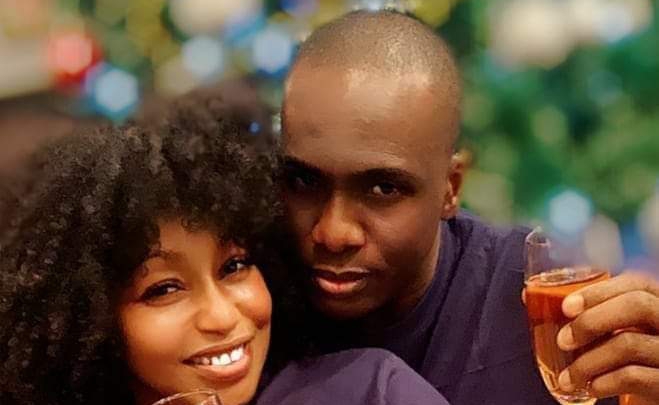 Is Nollywood actress Rita Dominic engaged to Fidelis Anosike, Publisher of Daily Times Newspaper? This is the question many people have been asking since their loved up pictures surfaced online.

Everywhere was cool and dry until Rita Dominic decided to share pictures of her chilling with a mystery man whom olofofos later identified as Fidelis Anosike, Publisher of Daily Times Newspaper.

The way the Internet reacted to the news is to be expected. Some people were awwwwing and congratulating Rita while others were mocking feminists who refused to settle down with men this year.

One man said single and happy is a farce. According to him, no woman is happy bring single because it goes against the Scriptures. When someone asked him if Jesus and Apostle Paul who didn’t get married broke the Scriptures, he didn’t respond.

Back to my gist. Linda Ikeji’s blog reported that Rita Dominic and Fidelis Anosike are engaged to be married next year. Trust done Nigerians to turn the post to a prayer session for Linda Ikeji herself.

Some people were busy praying for Linda to be the next in line to get married. These people are very funny. The way they carry other people’s lives on their heads is amusing.

Is Rita Dominic really engaged to Fidelis Anosike? Did she mention that in her post or are we just speculating this because this is what we expect from her as a single woman in her 40s?

The way some Nigerian ladies have turned this picture into motivational posts has left me in stitches. One lady said it is never late to find true love and God’s time is the best.

Another lady said “What God cannot do doesn’t exist. She said she’s encouraged that her own man will locate her next year.”

I read a comment from a man that left a sour taste in my mouth. According to this man, Rita Dominic is not mature for posting the picture of her man on social media.

He said: “Rita hasn’t grown up at all. Flaunting her man at this stage of her life when she supposes to be celebrating wedding anniversary is a sign of immaturity. Moreover, she needs to mellow down, be secretive and keep her love affair off social media for now till everything is set and done.”

What do I know?

If it is true that Rita Dominic is engaged to Fidelis Anosike, I’m happy for her but to be on a safe side, I await her to share the good news herself.

Compliments of the season to all my readers and subscribers. I love you all.