Four men have been executed by hanging in Iran for gang raping a woman in front of her husband who they tied up and made to watch the horrific scene.

The wicked attack took place while the couple were climbing a mountain in the Khorasan Razavi province of Iran.

The rapists were identified by police and were charged with the kidnapping and rape of a woman and with threats of violence towards a man.

The defendants had tied the man’s hands and feet together before sexually attacking his wife in front of him.

The Criminal Court of Khorasan Razavi sent the case to the Supreme Court where the four men were sentenced to death by hanging in Mashhad Central Prison. 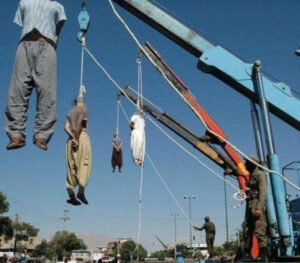 In Iran, it’s a rare occurrence for men to be prosecuted over sexual crimes as the laws are normally structured to work against rape victims who often face counter charges of adultery, indecency or immoral behavior after reporting a sexual assault.

Accused rapists are usually only convicted with the testimony of four male witnesses, or a combination of male and female witnesses.

Iran is one of six countries in the world to execute people found guilty of rape, and the Iranian regime executes more people per capita than any other country.

More than 250 executions were carried out in the country in 2019.

This is a heinous crime that deserved this sentence meted out to those rapists. It is bad enough for them to rape a woman but doing it in front of her husband and forcing him to watch is the height of depravity and wickedness.

I hope that woman heals from this traumatic experience. She got justice at last. I wish her the best.

People that send friend requests to other people’s…

10 things billionaire Linda Ikeji is grateful for in 2018

Woman commits suicide after her husband stole her money to…