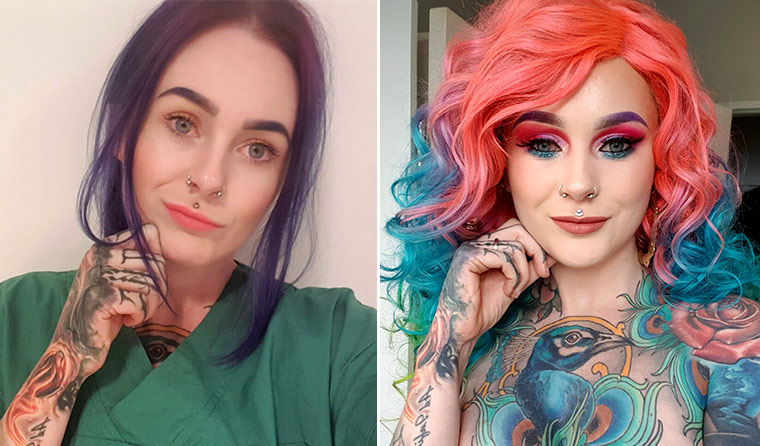 Dr. Sarah Gray is an orthopaedic surgeon, but popularly known as the world’s most tattooed medical doctor. She describes herself as the most colourful doctor in the world.

Dr. Sarah Gray got her first tattoo when she was 16, now her whole body is covered in ink, except for her face. She confessed that she never planned on getting so many tattoos.

She only wanted to ink pieces that signifies important periods of her life, but then she got carried away with the idea of expressing herself creatively through body art.

Corporate policy in the medical field prohibits offensive tattoos — but Dr Sarah doesn’t have any of those.

Perhaps the rules would be different at private medical centers, but Dr. Sarah has visible ink pieces on her hands, knuckles, and neck, and it’s not an obstacle when working for a public hospital.

Dr. Gray can no longer put a number on how many tattoos she currently has, saying it is now more of a ‘cohesive collection’.

She instead prefers to measure it in terms of the number of hours she has spent being tattooed, which currently stands at around the ‘350–400 hours’ mark.

Dr. Sarah Gray met her husband through the body art industry, they now co-own a tattoo studio in Adelaide called The Grim Raptor.

The studio does free realistic nipple tattooing for women and men who have overcome breast cancer or had mastectomy breast reconstructions.

On being stigmatised, she said that many people assume that heavily tattooed people are bad people and she wants people to know that having tattoos is not a reflection of one’s values.

While she wants to shatter that image associated with having body art, Dr. Sarah says her main message is that a doctor’s appearance should have no bearing on their work.

Dr. Sarah Gray with her husband and baby

Her message for other doctors regarding appearance is simple:

“You don’t have to be muted in appearance or fly under the radar to fit a certain preconceived mould.”

“I am really passionate about wanting people to realise that just because I’m colourful doesn’t mean I’m not competent.”

When asked about the biggest moment that has stuck with her she said: “I had one particular patient that came in very unwell.
I cared for him for a long time until he went home for palliative care. He was a person of much older vintage that traditionally doesn’t like tattoos.”

“Towards the end, he really thanked me for being this kind of colourful light in his life.
When he passed away, his family sent me a card and some flowers and just said thank you so much for really changing his outlook in life and being a positive influence on him.
So that, I think, has been the biggest moment that’s stuck with me so far.”

Dr. Sarah Gray used to be an Inked Magazine Australia/New Zealand cover model. She also worked few years in hospitality management. She then studied to be a dental assistant before going back to school again to study medicine.

She has always had interest in a career within the medical field. Her father who was a doctor is her biggest role model.

Dr. Gray laments the fact there is still a stigma surrounding people with tattoos. So many people get stigmatised for being heavily tattooed and as being a “bad person”. Having tattoos is not a reflection of your values.

While she wants to shatter that image associated with having body art, Dr. Gray says her main message is that a doctor’s appearance should have no bearing on their work.

“I just think people focus on appearance too much and it shouldn’t really make a difference to what you can do in your life. I don’t think your appearance should be a hurdle, she said.”

Dr. Sarah Gray was recently involved in a large systematic review research study, looking at developmental dysplasia of the hip (DDH) in newborn babies with some of the country’s most respected orthopedic surgeons.

In 2017, she published a research in Metastatic Spinal Cord Compression which she presented at the Global Spinal Conference, Milan.