Prophet Odumeje, Rita Edochie vow never to forgive Ada Jesus as they rain curses on her

Popular comedian, Ada Jesus is down with kidney disease. She was advised to apologize to people whom she offended with some of her controversial posts.

Two of the people happen to be pastor Odumeje and actress Rita Edochie who Ada Jesus claimed helped to perform some fake miracles in his church. The man of God angrily cursed her and as a result, her family believe that’s why she is down with a kidney disease.

A recent video that surfaced on the net shows Ada Jesus and her family in Pastor Odumeje’s church apologizing to him to forgive her so she can be well again but he refused to accept their apology.

From the video, pastor Odumeje was  reluctant in accepting the apology of Ada Jesus and her family. He bitterly recounted how Ada Jesus damaged his reputation with the things she wrote on her Facebook wall. He asked her to go and bring the others with her.

Ada Jesus needs not only prayers and support from her loved ones at the moment, but the young woman also needs money to go for medical treatment abroad before it’s too late. She looks so frail and fragile.

Some Nigerians have taken to social media to express their feelings about this trending issue. While some people supported Prophet Odumeje’s actions, others condemned his refusal to extend forgiveness to another human being as a man of God. 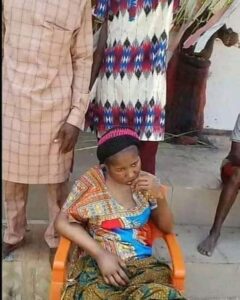 The way Rita Edochie was cursing her eee,I feel like making that woman go mad, she is very heartless.

In her next world, she will bridle her tongue and concentrate on her business. And I pray others will learn from her mistake especially her friend Ella Ada.
Stop trending with someone name they will not hear. Let her surrender her life to Christ and have faith on God for her divine healing.

Nobody, I repeat nobody is greater than God. God will heal her and perfect all that concerns her nobody should take glory of anything that is wrong with Ada Jesus. The family should seek medical attention and trust God for healing.

May we never use our mouth to say what will kee us because of fame and money. Nothing like medical treatment, this is a spiritual issue. God willing intervention upon her.

All of us now love Ada Jesus. When she was taking peoples name down to make a name for herself, you guys were following her page and hailing her right? When you love someone, tell them the truth when you still can. Mind whatever you say to people because you can’t take the words back.

What that lady needs is medical attention. She has been sick for a long time so I heard. Nobody cursed her anything. Make una rest abeg.

It’s a pity that most people don’t know the implications of speaking against men of God even if they are wrong. God himself struck Miriam with leprosy just for speaking against Moses. Meanwhile a lesson is leant already both by her and others as well. Please pastor forgive her bikonu o…. Ada Jesus, you are healed in Jesus’ name.

Mo Abudu celebrates friend who got married at 50 and gave…

What my life experiences have taught me as a woman