Popular Nigerian Comedienne Ada Jesus has died of kidney failure two days after celebrating her birthday in the hospital.

Mr. Harrison Gwamnishu who led the group of Nigerians that took Ada Jesus to hospital told BBC news this afternoon that she was no more.

The popular Comedienne Ada Jesus has been battling kidney problems for some months. 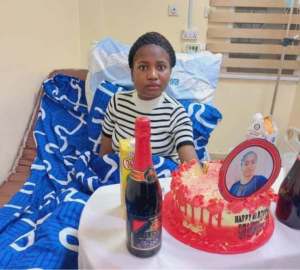 It is understood that the comedienne whose real name is Mmesoma Mercy Obi, died at an Abuja-based hospital in the early hours of Wednesday.

The tragedy comes after a lingering face-off involving her, Rita Edochie, and Odumeje, a controversial Onitsha-based clergyman, was resolved.

The movie star had, however, dismissed the allegations and went on to curse the comedienne for attempting to smear her reputation.

It was gathered that not long after the Instagram sensation made the allegations, she took ill and later became paralysed.

Rita had earlier vowed not to forgive the entertainer, while the clergyman had initially maintained the same stance, saying “nobody speaks against me and go free. I’m not a man that you can joke with.”

Nigerians are reacting to the news of her death on different social media platforms. While some people are sad that Ada Jesus is no longer with us, others are calling for the arrest of Pastor Odumeje whom they believe is responsible for her death. 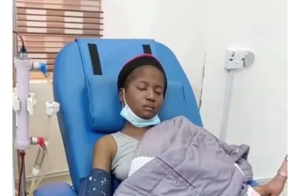 “Those calling for the arrest of Odumeje have lost it. People get sick and die of that sickness especially if they didn’t get good medical attention on time.

Some people choose to believe that such diseases are spiritually induced, probably because that’s what your pastor wants you to believe. If you are sick get medical help fast and don’t go drinking olive oil and bathing with salty water,that will not cure you. “My people perish due to lack of knowledge” knowledge of getting medical help when sick,knowledge of birthing through CS as advised by your doctor against what your pastor told you of birthing like Hebrew women, knowledge of IVF and etc. Make una leave Odumeje alone. May she rest in peace.”

“Hmm. This is so painful… 💔
Ada Jesus has been suffering from this ailment a long time ago. The so called pastor did not lay threats on her, it was only a curse so he can’t be arrested except they is evidence that he killed her.”

“Odumeje cannot and will never do anything to her. I feel that there is more to what happened because He claimed that he had never seen her before but pictures and videos of them surfaced online later. The real truth on what cause quarrel between them is now buried. Allow the girl to rest in peace bikonu.”

“But Ada Jesus said she will kill Ken and if she didn’t kill Ken, let her die a disgraceful death. And she didn’t kill Ken o, maybe what she swore with her life has come to pass. There is power in our tongues and when you discovered that you have that power, use it to bless people and not to destroy. May her soul rest in perfect peace Amen.”

Your challenges are temporary, better days are ahead

The Nigerian woman is a stranger to choices

Why do people only show love to the dead?

10 foods you should avoid before bed