Reports of a blossoming romance between Kim Kardashian and Van Jones are circulating again.

While neither party has confirmed or denied the new speculation, the fact that the whispers only seem to be swelling in intensity suggests that there might be some truth to the reports.

Most recently, Page Six’s Cindy Adams breathed new life into the reports after she posted, “A new burble’s coming out of the Kim Kardashian klub. Throats are clearing throats after whispering the name Van Jones.”

This is the second time that Jones and Kardashian’s names have been linked together since they both appeared as keynote speakers at Rolling Stone’s Criminal Justice Reform Summit. The two first began to forge a friendship when they met at the White House that same year.

“I think, like a lot of people, I had a missed impression [of Kim],” Jones told Andy Cohen during a 2019 appearance on “Watch What Happens Live”. “I had her frozen in time like in the Paris Hilton Days. She’s brilliant. Brilliant. Brilliant.” 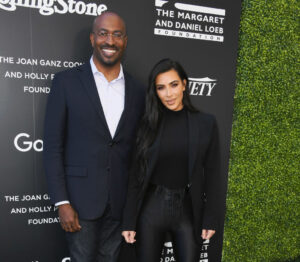 As for why he believes that she will make a great attorney, Jones said, “She’s incredibly persuasive and she eats law books for like, breakfast.”

It was also during this interview where Jones shared that he and Kardashian are in contact with one another “a couple of times a week.”

While it certainly seems as though the foundation for a relationship is potentially there, according to Radar, sources claiming to be close with Jones say that the reports are not true.

“He has enormous respect for Kim and what she has done to reform the criminal justice system, but he doesn’t want to be part of her circus of reality TV crews and social media. Van takes himself very seriously,” the insider said.

“He is a total media snob and is more interested in The New York Times than E! and Bravo. He likes Kim Kardashian but has zero interest in becoming part of her tabloid world. Plus, he knows that anyone that dates Kim also has to date her entire family. It’s a hard pass from Van.”

They did, however, suggest that the reality star has a romantic interest in Jones.

“Kim likes him. He’s smart and stable. He has his own money and fame, and he is a good man,” the source said.

Kardashian filed to end her marriage to Kanye West after nearly seven years. Jones and his wife of 13 years, Jana Cater, split in 2020.

No matter what you do, people will still criticize you

How Nigerian society messed up women

Your life is looking sideways if you take care of your…