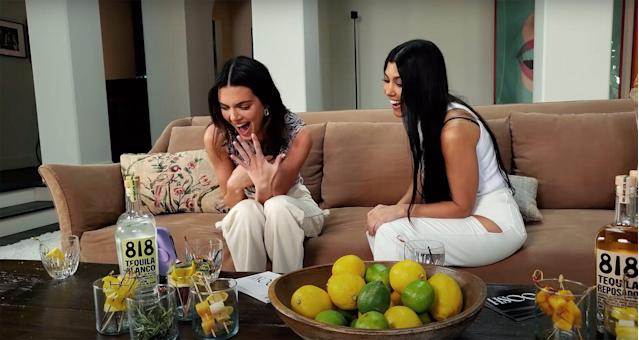 Kendall Jenner pretended to be engaged while playing a hilarious game of truth or dare with sister Kourtney Kardashian.

In the closing ceremony of the Poosh Your Wellness virtual festival on Saturday, the two sisters got together to play the game as they enjoyed some tasty drinks from Jenner’s 818 Tequila brand.

Although things got off to an easy start, with the two sisters dishing on their strangest food combinations, for one of her dares, Kendall, 25, was tasked with telling her family that she was engaged.

“Oh my God,” said the model, who is dating NBA player Devin Booker. “But it’s believable so I will do it.”

However, before she broke the big news on the family group text, Kendall knew she needed a very important prop: a ring. Fortunately, somebody else in the room had one for the Keeping Up with the Kardashians star to borrow.

“This is amazing,” replied Kourtney, 42. “You know Khloé is gonna write a novel.”

However, right away Kendall’s sisters knew something was up.

Almost immediately after sending the message, Kylie Jenner called up her older sister. “You’re lying,” she said, noting that one of the biggest giveaways was that the ring “doesn’t fit you.”

“Well, it needs to be sized,” Kourtney replied, before Kendall hung up on Kylie to answer a call from Kim Kardashian, who also wasn’t buying the engagement news.

But by the time Khloé called, Kendall had given up on the prank and immediately told her sister what was going on.

“That’s so stupid, why would you do that to us?” said the Good American founder, as Kourtney pointed out, “Well, at least we know you guys will be excited when the day comes.”

Earlier in the game, Kendall was also tasked with another prank: having to tell her mom that she was pregnant.

While the model was able to start off the phone call with a straight face, things quickly fell apart.

“That’s so weird you just told me this because I dreamed about this last night,” mom Kris Jenner told her daughter, who immediately had to stifle her laughter.

“I think it’s great news, but I’m your mom,” she added, before Kendall and Kourtney revealed that they were only joking.