Christian Pulisic admits he was ‘very frustrated’ to be benched for Chelsea’s Champions League semi-final second-leg victory over Real Madrid but will work hard to get back in the starting XI.

The American had netted a crucial away goal in Spain in the first leg last week but at Stamford Bridge on Wednesday night he was only named on the bench, with Kai Havertz – who had netted twice in the Premier League against Fulham at the weekend – picked ahead of him.

Chelsea took a first-half lead on the night when Havertz’s chip came back off the bar and was nodded home by Timo Werner, though Pulisic helped wrap up the victory later on.

The winger entered the fray in the 67th-minute, replacing Werner, and 20 minutes later he burst into the box and crossed for Mason Mount to secure a 2-0 win on the night and 3-1 victory on aggregate.

Chelsea will take on Manchester City in the Champions League final in Istanbul at the end of the month, having already beaten them at Wembley in the FA Cup semi-final – a match Pulisic was also on the bench for. 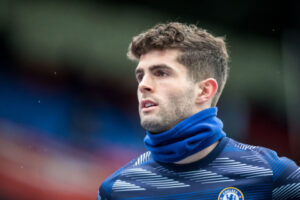 The 22-year-old is clearly desperate to be in the starting XI for the final and, despite being delighted to overcome Real Madrid, was not too happy about being benched by Thomas Tuchel.

Asked how he felt to be named on the bench, Pulisic told CBS Sports after the game: ‘Very frustrated. Umm, yeah, there’s not much else to say.

” I wanted to play from the beginning, as I always do. ‘I’ve had to continue to prove myself over and over again.

‘”But, as always I reach out to God and he gives me strength. With that behind me, nothing can stop me really.”

Pulisic did not seem too down by his selection snub, though, and joined in with the rest of the squad as they celebrated their progression to the Champions League final in the dressing room after the game.

10 things you should know about Ann Winblad, Bill Gates ex-girlfriend

What if your husband doesn’t like your family and…

Getting married or buying a car cannot make one feel better…