Jennifer Love Hewitt, who is expecting her third child with her husband Brian Hallisay, shared a pic of her growing baby bump on Instagram.

Jennifer Love Hewitt is having a very relaxing summer as she waits for the arrival of baby No. 3.

The 9-1-1 star, who announced she was expecting her third child with husband Brian Hallisay earlier this week, took to her Instagram Story to share how her pregnancy is going. 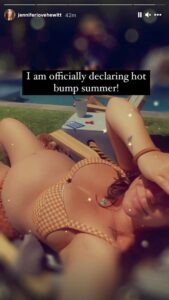 She wrote over a photo of herself sporting an orange bikini with her baby bump on full display, “I am officially declaring hot bump summer!”

Later, the I Know What You Did Last Summer star reposted a fan account that shared the image along with the words, “We have a real life mango on the way.”

The actress first shared news of her growing “mango” in a May 18 Instagram post featuring a photo of herself holding up a pregnancy test.

She wrote in the caption, “Oh baby! We have another one on the way. So excited to finally share this news with all of you. Thank you @clearblue for being part of our journey and giving us a platform to share this news!”

Jennifer Love Hewitt was born on February 21, 1979. She is an American actress, producer and singer. 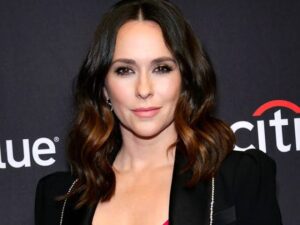 Hewitt began her career as a child actress and singer, appearing in national television commercials before joining the cast of the Disney Channel series Kids Incorporated from (1989–1991).

She had her breakthrough as Sarah Reeves Merrin on the Fox teen drama Party of Five from 1995 to 1999 and rose to fame as a teen star for her role as Julie James in the horror films I Know What You Did Last Summer (1997) and its 1998 sequel as well as her role as Amanda Beckett in the teen comedy film Can’t Hardly Wait (1998).

Hewitt grew up in Nolanville in Central Texas and has close kinship ties in parts of Arkansas. After their parents divorced, Hewitt and her older brother Todd were raised by their mother.

On November 20, 2013, Jennifer Love Hewitt married actor Brian Hallisay whom she met on the set of The Client List.

Dos and donts of sensitive skin women should know

Love yourself so much that when someone treats you badly,…