Defending world champion gymnast Simone Biles became the first woman to land the Yurchenko double pike vault move in competition at the GK US Classic in Indianapolis on Saturday.

The Yurchenko double pike, a high-difficulty skill historically only done by men is a roundoff onto the springboard, followed by a back handspring onto the vaulting table, and ending with a piked double backflip into the air to landing.

24-year-old Biles performed the move and then added two extra hops for a slightly imperfect landing.

“I was just thinking, ‘Do it like training. Don’t try to like overdo anything,'” she said afterward, “because I have a tendency as soon as I raise my hand to kind of overpower things, and I did a little bit, but at least I was on my feet. It’s a new vault and I’m proud of how today went.”

Biles competed while wearing a leotard decorated with a rhinestone goat, an apparent hint to her claim as the GOAT, or greatest of all time. 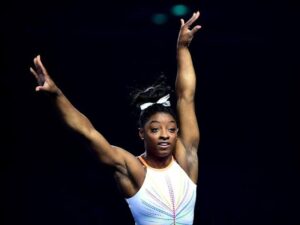 Overall, the four-time Olympic gold medalist successfully defended her GK US Classic all-around title with a score of 58.400 in what was her first competition in more than a year and a half. Biles took the top score on both balance beam and floor exercise.

Jordan Chiles, the 20-year-old from Spring, Texas, finished second in the all-around with 57.100 points, and Kayla DiCello, the 17-year-old from Boyds, Maryland, took third with 56.100.

After being postponed due to the coronavirus pandemic, the Tokyo Olympics are set to begin in late July, barring further postponement or cancellation. The US Olympic team trials will be held June 24-27 in St. Louis.

Simone Biles may be just 4-foot-8, but she will not shrink herself nor her abilities or achievements so that other people can feel better.

Not for the International Gymnastics Federation, not for USA Gymnastics, and certainly not for the antiquated idea that women are supposed to be quiet, demure, resistant to shining a light on their own greatness.

Despite the hop, Biles received a score of 16.100, by far the highest for the apparatus at the U.S. Classic meet.

It wasn’t as high as it could have been. Whether it’s because it wants to discourage other gymnasts from attempting her moves or just reluctance to embrace the way the sport is evolving, the International Gymnastics Federation or FIG, which sets the starting score for all moves, undervalued Biles’ vault. 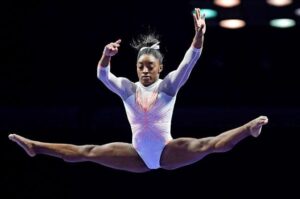 It’s not the first time it has undervalued one of her extraordinary, incapable-of-being-done-by-others gymnastics moves.

If other gymnasts can’t do what Biles is doing, that’s not her issue. She should get the full value for her brilliance.

She said as much Saturday, intimating that the federation doesn’t want her winning by too much, so it intentionally underscores her (the starting score is added to judges’ execution score, which has a maximum of 10.0; thus Biles’ 16.100 came from adding a 9.500 execution to the 6.6 value given to the Yurchenko double pike); she believes this is the case for the double-twisting, double-tuck balance beam dismount she debuted in 2019 as well.

Asked why Biles does the moves despite not getting as much credit in the scorebook as she should, she responded, “because I can.”

Those three powerful words.Yes, Biles is sending a message to FIG: she won’t do less because it can’t catch up to her superiority.

But she’s also sending a message to girls and women everywhere to fully embrace their power, to use their voice, something Biles has done with increasing frequency over the past few years.

10 types of relationships women should avoid

My next husband should start saving money, my bride price…