A woman who got married to seven husbands has revealed how she manages all of them and also satisfies their needs.

In a documentary published by Youtube content platform, Afrimax, the African woman with seven husbands also disclosed how she satisfies them sexually.

According to the woman, she is a powerful spiritualist and none of her husbands would dare cheat or think of leaving her. She proudly revealed that she has built a house for all her husbands, hence why she’s able to discharge her sexual duties with them separately in their rooms.

The polyandrous traditional healer who is reportedly living in peace with her husbands, does not cut her hair as was the case with her predecessors saying, like the Biblical Samson, her powers emanated from the hair. 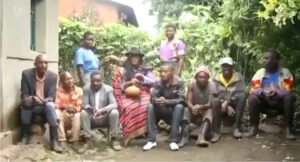 When asked why she married seven husbands she said: “I didn’t do it of my will. I was commanded by the elders. It was an order from them and that’s when I was given superpowers.

The elders told me to produce more children from my husbands and I mustn’t have more than one child from one man hence the reason why I married more than six husbands. It was strange to me but I had to comply else I’ll be seriously punished,” she said.

She noted that she wasn’t the one who chose the men but was directed by the spiritual elders to them. “When I approach these men, they have no choice than to agree because of my superpowers.

I built a house for each of these men and visit them anytime to make love and satisfy their needs. These men can never dare cheat on me as my superpowers reveal it to me before they think of it,” she said.

The video is trending at a time when there is an online debate on if women should be allowed to marry more than one husband. 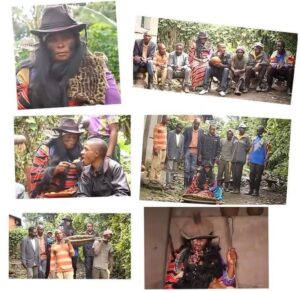 Polyandry is a form of polygamy in which a woman takes two or more husbands at the same time. Polyandry is contrasted with polygyny, involving one male and two or more females.

If a marriage involves a plural number of “husbands and wives” participants of each gender, then it can be called polygamy, a group or conjoint marriage.

In its broadest use, polyandry refers to sexual relations with multiple males within or without marriage. These men are husbands to one woman and they live peacefully with one another.

Polyandry is believed to be more likely in societies with scarce environmental resources. It is believed to limit human population growth and enhance child survival.

It is a rare form of marriage that exists not only among peasant families but also among the elite families.

Polyandry in Tibet was a common practice and continues to a lesser extent today. A survey of 753 Tibetan families by Tibet University in 1988 found that 13% practiced polyandry.

Polyandry in India still exists among minorities, and also in Bhutan and the northern parts of Nepal. Polyandry has been practised in several parts of India, such as Zansjar, Ladakh, Rajasthan in the Jaunsar-Bawar region in Uttarakhand in South India.

Is preserving the sanctity of marriage the duty of Nigerian…

It’s not too late for you to make it