Real Madrid strengthened its defense by signing David Alaba on Friday after the defender ended his highly successful stint at Bayern Munich.

Madrid said the 28-year-old Alaba agreed to a five-year contact at the Bernabeu and will be presented at the club after Euro 2020.

His official presentation will be after the European Championship where he will play for Austria, the club said.

Alaba’s arrival coincided with contract negotiations stalled between the club and veteran defender Sergio Ramos. Ramos’ contract runs out at the end of June.

David Alaba is leaving Bayern after 431 games in 13 years at the club, where he won 10 German titles and the Champions League twice. He said he was looking for a new challenge after contract renewal talks with Bayern broke down in November over his wage demands.

David Alaba was a versatile player who usually played in defense for Bayern and as a midfielder for Austria. Alaba has played 79 games for Austria. 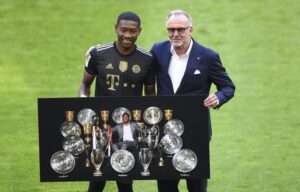 Alaba arrives at Madrid with doubts over the future of both of the club’s first-choice centre-backs.

Negotiations over an extension for captain Sergio Ramos who is also out of contract this summer, are deadlocked, while Raphael Varane’s contract is due to expire in 2022.

Alaba made his first-team debut for Bayern in March 2010 and, except for a brief loan at Hoffenheim in 2010-11, has spent his entire professional career with the German giants.

He has been a key figure in one of Bayern’s most successful teams, making more than 400 appearances for the club, winning two Champions League trophies — including in 2020 — 10 Bundesliga titles and six German Cups.

In November, Bayern confirmed that they would not be renewing David Alana’s contract and were withdrawing their offer of an extension after it was rejected by the player and his representative.

The decision sparked a scramble for his signature among a number of top European clubs with Madrid, Barcelona, Manchester United, Paris Saint-Germain, Liverpool, Manchester City and Chelsea all linked.

Regular good sex can lower blood pressure as successfully as…

There’s more to marriage than looking for a cook, maid and…