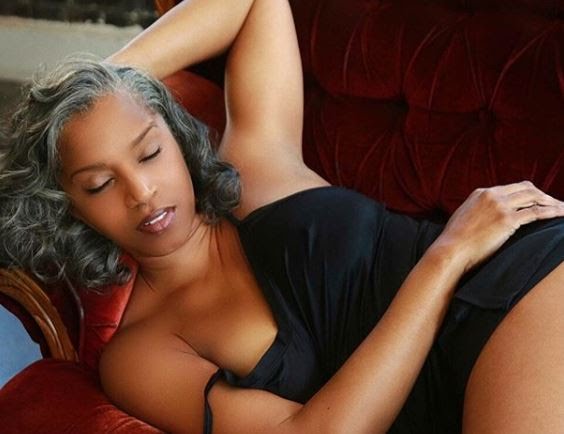 A 53-year-old African American woman, Rolanda Rochelle, has taken the social media by storm after her youthful photos went viral on the internet.

The phrase ‘Black don’t crack’ is fully embellished in Rolanda Rochelle who has stunned Social Media users with her youthful looks.

Many wondered how she could be this beautiful and managed to stay single for a long time but taking a cue from her page, one can tell her glow and youthful looks stem from the fact that she has no man stressing her..lol

Rolanda Rochelle is a realtor, brand influencer, lifestyle and travel blogger, and a pro-aging advocate based in the United States of America.

Rolanda Rochelle who goes by the handle @rogirll on Instagram has gained thousands of new followers since her photos went viral. As at the time of writing this post, Rolanda Rochelle’s following stood at 85K and still counting.

An earlier video Rolanda Rochelle posted on social media showed she is still single but she has a grownup daughter. In the video, Rolanda was heard talking to an imaginary husband and later realized she does not have one.

Most of Rolanda Rochelle’s posts on social media come from Atlanta and she is likely based there.

Rolanda Rochelle is about 5 ft 8 inches. Her distinct features include her brown eyes, grey hair, and of course, a wide grin.

Even though Rolanda is over 50 years old, she is still healthy and active. The reason behind such fitness is her healthy diet, which includes fresh vegetables and fruits and a lot of nuts. She does enjoy a good drink though.

Rolanda Rochelle was born on 5 September 1967, which means she was 53 years now going on 54. Her real name is Rolanda Wright.

Not much was known about her family. There was a photo in Rolanda ‘s IG, where she wished her father on father’s day. There was an accompanying picture too, however, there was no mention of his name.

Some sources have stated that Rolanda currently lives in Decatur, Georgia. However, her hometown was most probably Atlanta, Georgia.

The video Rolanda Rolanda Rochelle posted had her speaking with an imaginary husband only to realize later on that she was not really married and did not have a husband.

There was another Instagram post with her daughter, in which Rolanda Rochelle and her daughter were on the streets protesting for justice and equality for black women.

Advertisements
In this article:Beauty, Rolanda Rochelle