Super Eagles head coach, Gernot Rohr has stated he’ll like his team to beat the Indomitable Lions of Cameroon again.

The two African superpowers will clash in the first of their double-header friendly on Friday, June 4 at the Stadion Weiner Neustadt, Vienna.

In recent outings, the Super Eagles have dominated against Cameroon winning two of the last three fixtures against the five-time African champions with the other ending in a draw.

In their recent meeting, Rohr’s men beat the Indomitable Lions in the Round of 16 stage at the 2019 Africa Cup of Nations in Egypt.

The players are well motivated. They want to do well. The training sessions have been good. They are happy to come together again,”Rohr the Super Eagles media team on Thursday, June 3.

“The last time we played was in March. We have two victories against Benin and Lesotho. Now we are in June . This is the last preparations for us . We have the AFCON draw at the end of June. 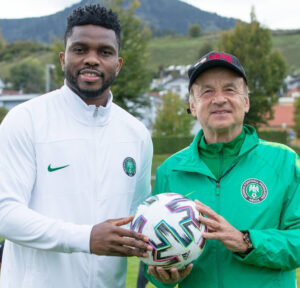 “The players want to do well to be in the squad for the World Cup qualifiers.”

The Super Eagles are unbeaten in their last four games.

Both African giants face off in the first of two friendlies on Friday, looking to continue preparations for their World Cup qualifiers which begin in September.

Nigeria have had the upper hand over old foes Cameroon in recent competitive meetings. Their last encounter ended 3-2 to the Super Eagles at the 2019 Africa Cup of Nations in Egypt.

Nigeria have 20 players in their squad, while Cameroon expect 26 in camp.

Three of the Super Eagles in the squad are goalkeepers, leaving Gernot Rohr with only six outfield players on the bench for Friday night.

This essentially means the West African nation won’t have a wealth of options to choose from, thus limiting the wiggle room to impact the game.

Several key players had to withdraw from the three-time African champions’ squad and their absences will be felt when the teams face off on Friday.

10 subtle signs you may be depressed

Irresistible qualities of the new woman in Nigeria