Staying in a verbally abusive relationship can have long-lasting effects on your physical and mental health, including leading to chronic pain, depression, or anxiety.

You may not think you are being abused if you are not being hurt physically. But emotional and verbal abuse can have short-term and long-lasting effects that are just as serious as the effects of physical abuse.

Emotional and verbal abuse includes insults and attempts to scare, isolate, or control you. It is also often a sign that physical abuse may follow.

Emotional and verbal abuse may also continue if physical abuse starts. If you have been abused, it is never your fault. Nigerian women should stop blaming themselves fir being abused.

Emotional and verbal abuse may begin suddenly. Some abusers may start out behaving normally and then begin abuse after a relationship is established.

Some abusers may purposefully give a lot of love and attention, including compliments and requests to see you often, in the beginning of a relationship. Often, the abuser tries to make the other person feel strongly bonded to them, as though it is the two of them “against the world.” 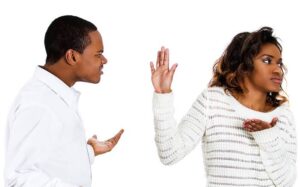 Over time, abusers begin to insult or threaten their victims and begin controlling different parts of their lives. When this change in behavior happens, it can leave victims feeling shocked and confused.

You may feel embarrassed or foolish for getting into the relationship. If someone else abuses you, it’s never your fault.

Some effects of verbal abuse:

Your partner’s behavior may leave you feeling as though you need to do anything possible to restore peace and end the abuse. This can feel stressful and overwhelming.

If your partner refuses to change after you tell them you are not comfortable with the way they communicate with you, leave.

You don’t have to endure a verbally abusive relationship because it will affect your health in the long run. You shouldn’t jeopardize your health because you want to be in a relationship.

10 things you should expect when dating a November born

My boyfriend proposed to me but insists I close my bank…

Clear signs you are dating a manipulative guy