In relationships and marriages, when someone repeatedly uses words to demean, frighten, or control someone, it’s considered verbal abuse.

You are likely to hear about verbal abuse in the context of a romantic relationship but it can also occur in other family relationships, socially, or on the job. Verbal abuse takes a toll. It can sometimes escalate into physical abuse, too.

If you are being verbally abused, know that it’s not your fault. You may not even know you are being abused. You have to know how to recognize it and what you can do next.

In relationships, couples get into arguments from time to time. Sometimes they lose their cool and yell. It’s all part of being human, but verbal abuse isn’t normal.

The trouble is, when you are involved in a verbally abusive relationship, it can wear you down and you might begin to question yourself or walk around eggshells when your partner is around so as not to provoke them.

Men and women should know that normal disagreements don’t dissolve into name-calling or personal attacks, they don’t happen every day, arguments revolve around a basic issue. They aren’t character assassinations.

When you disagree with your spouse, you listen and try to understand the other’s position, even when you are angry. One of you may yell or say something truly awful out of frustration, but it’s an unusual occurrence and you work through it together.

Even if you can’t agree completely, you are able to compromise or move on without punishments or threats and arguments aren’t a zero-sum game: One person won’t win at the detriment of the other. 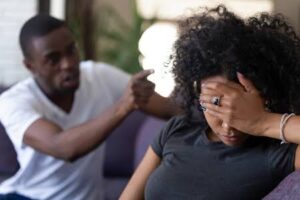 Consider it a red flag when the other person insults or attempts to humiliate you. Then they accuse you of being overly sensitive or say that it was a joke and you have no sense of humor. They frequently yell or scream at you.

Arguments take you by surprise, but you get blamed for starting them. The initial disagreement sets off a string of accusations and dredging up of unrelated issues to put you on the defense.

You are being abused when your partner tries to make you feel guilty and position themselves as the victim. They save their hurtful behaviors for when you are alone but act completely different when others are around.

They get into your personal space or block you from moving away. They hit the wall, pound their fists, or throw things. They want credit for not having hit you.

In relationships, name-calling is unhealthy. Sometimes this behavior is obvious, at other times; it is disguised as negative teasing. Habitual name-calling is a method of belittling you. You are being verbally abused when your partner says: “You don’t get it, sweetie, because you are just too dumb.”

Condescension is another attempt to belittle you. The abuser’s comments can be sarcastic, disdainful, and patronizing. It’s all to make themselves feel superior. Condescension is a tool of verbal abuse.

There’s nothing wrong with constructive criticism. But in a verbally abusive relationship, it’s particularly harsh and persistent in an attempt to chip away at your self-esteem.

Abusers want you to feel bad about yourself, so they tow the degradation line. They employ humiliation and shame to degrade you and eat away at your confidence. For example: “Before I came along you were nothing. Without me you will be nothing again.”

Manipulation is an attempt to make you do something without making it a direct order. Make no mistake about it: It’s meant to control you and keep you off-balance. Your partner might say, if you don’t do this for me, it means you don’t love me.

Don’t play the blame game with your abuser, you will lose. Human beings make mistakes all the time and might be at fault for something once in a while. But a verbally abusive person blames you for their behavior. They want you to believe that you bring verbal abuse on yourself. They will say something like: “I have to yell, because you are so unreasonable and stubborn!”

If someone is repeatedly accusing you of things, they may be jealous or envious, or perhaps they are the one guilty of that behavior. Either way, it can make you question whether you are doing something inappropriate.  A verbally abusive partner will say something like: “Why won’t you give me your cell phone if you’ve got nothing to hide?”

Refusing to talk to you, look you in the eye, or even be in the same room with you is meant to make you work harder to get their attention. This is called withholding or isolation. When your partner refuses to talk to you when you need to communicate your feelings, they are abusing you.

Gaslighting is a systematic effort to make you question your own version of events. It can make you apologize for things that aren’t your fault. It can also make you more dependent on the abuser. For example:You recall an event, agreement, or argument and the abuser denies that it happened at all. They may tell you it’s all in your mind, you dreamed it, or are making it up.

It isn’t unusual for two people to disagree or argue about the same thing more than once until they find common ground. But abusers will reignite that old argument again and again just to push your buttons, never intending to meet in the middle. They love circular arguments.

Outright threats can mean that verbal abuse will escalate. They are meant to frighten you into compliance. If your partner keeps saying “If you do that, no one would blame me for how I would react”, they are verbally abusing you.

If you are experiencing verbal abuse, trust your instincts. Keep in mind there’s a chance it will eventually escalate. Now that you recognize it, you have to decide what you are going to do about it.

Nigerian men and women should know that abuse is not normal in relationships or marriages. Don’t allow anyone tell you that. You are setting yourself up for mental health issues in the future if you continue condoning abuse.

Reasoning with an abuser is tempting, but unlikely to work. Remember, you are not responsible for someone else’s behavior but you can set boundaries. Start refusing to engage in unreasonable arguments. Let them know you will no longer respond to or overlook verbal abuse.

Limit your exposure to the abuser as much as possible. If you are in the same social circles, you might have to make some difficult decisions by staying away from your abuser. If you can’t avoid the person altogether, try to keep it down to situations where there are other people around.

Then, when you are ready, cut all ties if you can. Breaking things off with your abuser can be complicated in some situations, like if you live with them, have children together, or are dependent on them in some way.

You may find it helpful to speak with a counselor or join a support group. This is because sometimes, an outsider’s perspective can help you see things in a new light and figure out what to do next.

Healing from verbal abuse takes time, but it’s important not to isolate yourself. Reach out to supportive friends and family members. Tell them what you are going through and seek help.

Pull out the troops from Igboland, agitation for referendum is people’s right – Onyeka Onwenu tells Buhari

10 things you should expect when dating a November born

10 benefits of Ginger for women

Why ladies shouldn’t be ashamed of their monthly…