But the four-time Olympian had a touchy road to victory, giving birth to her daughter via emergency C-section just 10 months before.

On September 29, Felix earned her 12th gold medal at the track and field world championships in Qatar for the mixed-gender 4x400m relay.

This feat officially marked the 33-year-old down in history, as the runner surpassed Usain Bolt (considered the fastest man in history) breaking their 11-medal tie for the most gold ever won at the championships. 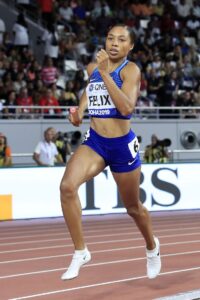 On October 6 the same year, she won her 13th championship medal as apart of the women’s 4x400m relay.

Much like fellow female athlete Simone Biles who recently surpassed a male gymnast’s record to officially becoming the greatest athlete-ever in her sport—Felix is transforming the world of sports.

“Break Records. Break Stereotypes. Break Barriers. And do it like a girl,” she wrote on Instagram. “It’s never just you. You never achieve goals on your own, it takes support. It takes a team. Tonight, I celebrate this gold medal with my team. With a group of incredibly strong barrier breakers. A group of world changers.”

On November 28, 2018, Felix welcomed her daughter Camryn with husband Kenneth Ferguson, a fellow track and field athlete himself. And though now the baby girl is perfectly healthy, her birth came with complications. 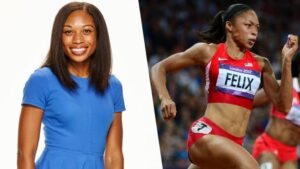 Due to severe preeclampsia, Felix had to deliver Camryn two months early via emergency C-section. According to CBS News, the baby weighed just 3 lbs. at the time of her birth and had to to stay in the NICU for 29 days.

“It was a really scary situation,” Felix said “And we really weren’t sure, you know, which way things were going to go.”

The athlete herself had to recover from her operation, and didn’t begin running again until July of this year.

“When you are talking about life-changing situations, I think becoming a mother and having a daughter and understanding what she’ll face in the world, it’s just bigger than myself and any comforts that I’ve experienced,” she told The Washington Post.

“I just had never expected to face challenges giving birth. That was the furthest thing from my mind. I can say that I definitely took my health for granted. Being a professional athlete, it’s what I do. That really shook my world.”

Why do Nigerian women give up so much for men?

#BBNaija: “If many of you had Angel’s confidence you will go…

What some Facebook users think about Joy Isi Bewaji and…