The 37-year-old who documented her journey on social media reached the mountain’s peak on May 23.

She revealed that the mountain challenged her physically and mentally.

“On the 10th day of the mountain, we arrive at Everest Base Camp (5,300 meters), where we will stay for most of the expedition, next 30-40 days,” Duarte wrote on Instagram alongside her first image from Everest Base Camp. “It’s amazing how giant everything is, beautiful! We know the entire team that will work with us on this journey.”

From there, she brought followers along for a tour inside her tent, for local ceremonies, for meetings with other female climbers, and more.

“There are very difficult moments here, such as breathing, eating, going to the bathroom, taking a shower, the low temperature and high altitude generate a lot of discomfort, but what I miss most is my family and friends,” Duarte noted in a video of Base Camp.

“Everything is temporary, I stay focused on the positive results in all the actions chosen and I move forward because I know that social transformation takes time and requires great efforts.” 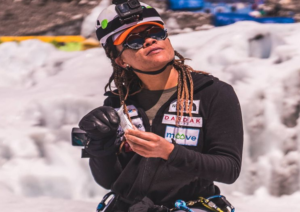 The change in environment and altitude had her developing pulmonary edema as she coughed and suffered chest pain on her way up the highest peak in the world.

Duarte said she trained for 12½ months before embarking on her trip along with several team members.

This is not the first mountain Duarte has climbed. She has scaled Mount Aconcagua, the highest point outside of Asia located in Argentina, five times and done other shorter trips up other mountains. Her interest in climbing Mount Everest piqued in 2019 after seeing a social media post, according to reports. 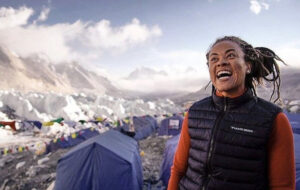 The Brazilian beauty, born on the outskirts of Campinas, a city in the southeast of the country, was supported by her team to complete this herculean but rewarding journey and she thanked them for their unflinching support.

Although she’s already in the history books, Duarte says on Instagram that her work still isn’t quite complete.

“I am focused on activating actions in the region where I live, on the outskirts of Campinas, as a pilot project and subsequently expanding,” she wrote. “We will have a sustainable and exemplary future.”

Different Period Blood Colours And What It Says About Your Health

The worst thing a woman can do to herself

You can never win dating the wrong man

Why unhappy couples stay together