Details of the incident are still sketchy but according to Daily Trust, a security operative was shot dead during the operation.

At least 30 students and three teachers were allegedly abducted.

This is the third known attack on a school in the country within three weeks. On May 30, pupils were abducted from an Islamic School in Tegina, Niger State.

Two weeks later, bandits stormed the Nuhu Bamali Polytechnic in Kaduna State and abducted a number of students and lecturers. 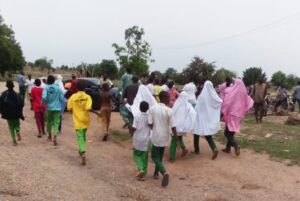 The February 26, 2021 incident in Zamfara state follows a raid on a school in Niger state in January, in which 42 children were abducted (with one killed in the process).

These both followed a mass abduction at a secondary school in President Muhammadu Buhari’s home state of Katsina in December, when more than 300 boys were taken. All the children have since been released.

The gangs hit schools for several reasons. For one, schools are soft targets. They often have weak security, with few or no fences, and guards tend to be few and poorly trained. State and federal security forces are unlikely to be an impediment, as they are stretched woefully thin across both the country and the region.

The attacks pose a serious threat to education in the North West. The region already has the worst statistics for educational performance in the country. Concerns about the students’ safety have prompted governors of six states in the region – Niger, Kano, Katsina, Jigawa, Zamfara and Sokoto – as well as Yobe in the North East, to shut some or all boarding schools, particularly in the most vulnerable local government areas, until a semblance of security has been restored.

Nigerian women, don’t get ruined in the name of love