The Big Brother Naija reunion which was aired tonight came with lots of drama and a physical fight between two female housemates.

The fight began after Kaisha narrated how Ka3na reportedly disrespected her mother as they partied together.

According to Kaisha, her mother liked Ka3na and wanted a photo with her. She revealed that her mother first sent Lucy before sending her sister Zainab to ask Ka3na for the photo, but she reportedly asked them to tell her mother to come to her table, a feedback she found disrespectful. 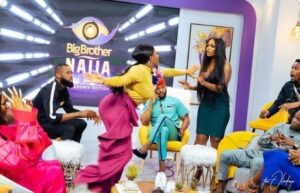 Ka3na however maintained that she thought they were talking about Kaisha’s manager. Lucy who backed Ka3na on this, however failed to explain why she didn’t deliver the message when she was asked to.

As the show continued, Kaisha made a demand for them all to stop talking about her mother. Lucy fired back by asking if her mother is a fruit, insisting she was talking about a fruit. This angered Kaisha who then threw a pillow at Lucy, leading to a physical fight.

Lucy was seen later being escorted without her wig on. She was also talking about Kaisha being violent and further threatened to beat her.

Nigerians are already reacting to the physical altercation by taking sides with their favorite housemate. 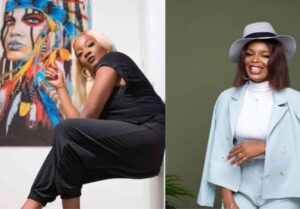 The comments below prove this:

“Those saying Lucy is wrong prolly watched the show on fb or watched but has comprehension issues or are just plain haters.

Lucy was wondering why hanty low budget tolanibanj was been paranoid and madam pulled a tolanibanj stunt without been informed of danger zoon.

Lucy: I’m still wondering what i did wrong. Oh oh oh is it that fruit thing?

Lucy: I’m talking about the fruit thing.
Is your mum fruit?
Fiam..

MLBT: fly pillow ear and dear and you expected Lucy not to commot her teeth?” 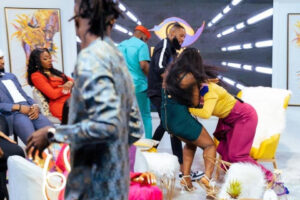 “Lol. I plead self defense on Lucy’s behalf. Why will Kaisha throw a pillow at her? She was already talking like someone that was high and Lucy don dey vex but restraining herself, only for Kaisha to throw the pillow. Haba!”

One pillow for the hype man, one slap for the table.

You no get power, you dey throw pillow.

Kaisha was busy trying so hard to defend her rage that she didn’t let either Lucy or Ka3na explain.

The fact that Lucy and Ka3na just fought, yet Lucy was trying to explain should’ve said something.

You no get power, you dey throw pillow against my Lucy? My Indabosky?

She dey form say she get the monopoly to misunderstanding.

10 things you should know about Chidinma Ojukwu, alleged murderer of Usifo Ataga

You are not your story, your story is just your teacher

Safety tips for ladies meeting guys outside Facebook for the…

Woman, marriage shouldn’t make you a dull furniture in…