Nollywood actress, Amara Maduka is undecided on the issue of marriage. She doesn’t know whether to get married or remain single.

But she quickly added that  once she makes up her mind to walk down the aisle, she would rather go for a man clean enough to lick anytime she wants. 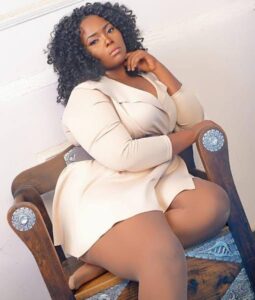 “I like ambitious men. I’m very ambitious and I don’t like men who settle for little. I don’t want you sitting in the house when there’s so much money to be made. I won’t be sitting in the house either. We go for it and we get it together. I also love kindness and whiteness in a man. I love a man who’s on a spiritual path as opposed to the one on a religious path. The physical looks don’t really matter to me but he has to look good enough for my eyes at least, and be really clean so I can always lick (him) wherever, whenever I want.”

But Amara Maduka has a word for cheating husbands. This is coming on the heels of the alleged murder of Usifo Ataga, Chief Executive Officer, Super TV by Chidinma Adaora Ojukwu, 21-year-old student of Mass Communication, University of Lagos.

She said: “To all sugar daddies, I’d love to say stay home with your family. But I’m not a hypocrite nor do I pretend because most of these men really live in hell courtesy of their wives. And if life is about happiness then I would never tell anyone how to find happiness. So, whatever makes you happy, go for it.”

Family assaults, arrests wife of Lagos socialite, Badru, who was burnt to death during a prayer session

10 ways to stop worrying about what other people think of…