Nick Cannon has said he’s having multiple children with multiple women on purpose.

The television personality made this known during an interview.

He asked the ladies to give him a word of advice during the interview.

“If you could give me one piece of advice now JT, what will it be? Real advice now,” Nick said.

“Just stay true to yourself and wrap it up,” she replied.

The woman replied: “Wrap it up like protect yourself.’

“I’m having these kids on purpose,” Nick responded, adding, “I’m not having them on accident.” 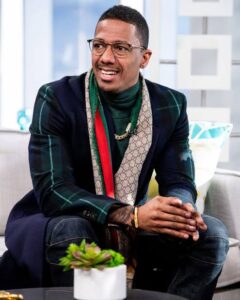 Nick Cannon was born on October 8, 1980 in San Diego, California. Cannon was largely raised by his paternal grandfather, whom both he and his biological father called “dad”.

As a child, Cannon grew up in Lincoln Park’s Bay Vista Housing Projects, which is a gang-ridden section of Southeastern San Diego.

As a rapper, Nick Cannon released his debut self titled album in 2003 with the single “Gigolo”, a collaboration with singer R. Kelly.

In 2007, he played the role of the fictional footballer TJ Harper in the film Goal II: Living the Dream.

In 2006, Cannon recorded the singles “Dime Piece” and “My Wife” for the planned album Stages, which was never released.

Nick Cannon married American singer Mariah Carey in 2008. The couple separated and filed for divorce in December 2014. The divorce was finalized in 2016, and they co-parent their children.

Man arrested for intentionally infecting his wife, stepdaughter, 12 others with HIV in Lagos

Parents of banker paraded for hiring assassins to kill her…