People left monkey emojis on the accounts of all three players who are Black men.

Prince William, who attended the match alongside wife Kate and son George, took to Twitter to release a statement, condemning the actions of those responsible. 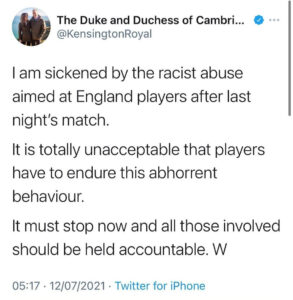 He said: “I am sickened by the racist abuse aimed at England players after last night’s match.

“It is totally unacceptable that players have to endure this abhorrent behaviour.”

“It must stop now and all those involved should be held accountable.”

Recall that Meghan Markle opened up during her interview with Oprah Winfrey that she suffered racial abuse while a working member of the Royal Family. 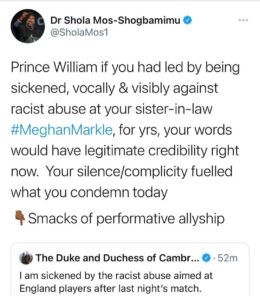 She said there were questions about how dark skinned her son will be when he’s born.

Also, shortly after Meghan Markle’s son, Archie, was born, a BBC Radio 5 Live presenter, Danny Baker, took to Twitter to post a black and white picture of a man and woman walking out of a hospital with a  chimpanzee and he captioned it  “Royal baby leaves hospital.”

The Royal Family did not speak up to condemn the photo.

Shola Mos-Shogbamimu is a British-born Nigerian activist, political commentator, author and lawyer, with qualifications from both New York and England.

She is a regular speaker on women’s rights, law, politics, diversity, equality and inclusion.

Shola Mos-Shogbamimu makes frequent appearances in the national and international media, including on BBC Television, ITV, CNN  and writing for such newspapers as The Guardian and The Independent.

Telling a woman she is a rare combination of beauty and…

This woman’s payback game is tight