Super TV CEO Usifo Ataga was having issues with his wife, he was not in a happy marriage – Arrested murder suspect, Chidinma Ojukwu reveals

Chidinma Ojukwu has shared more personal details about SuperTV CEO, Usifo Ataga who she was arrested for allegedly killing.

The 21-year-old University of Lagos student who was interviewed by Crime Fighters, described Ataga as someone who gets angry easily and was always busy.

She further revealed that the Super TV CEO was having issues with his wife and was not in a happy marriage, as it was more of catering for his kids.

Ojukwu also denied having N10m in her account, revealing that she has about N400-500k which was money she made from selling a laptop which the deceased gave her.

She further revealed that they rented a shortlet apartment because Usifo said it wouldn’t be fun staying in a hotel. 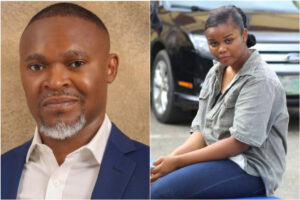 In a recent video making rounds on social media Chidinma Ojukwu says the late Ataga didn’t talk much about himself but she has met some of his friends. She said he smokes, drinks, likes to carry girls to have fun with and also do drugs.

Chidinma Ojukwu narrated how the late Michael Usifo Ataga told her to rent a shortlet where they can spend time together and she checked online and got one.

She told him about it and he told her to go and check the place out so that she can make payment, she did. She paid for four days and after an hour of staying in the apartment, he came and they later went to get food to eat.

After eating, he asked her what they needed and she said they needed to buy more drugs because the one she came with is finished.

Chidinma Ojukwu also revealed how the late Michael Usifo Ataga died and why she took his ATM card to withdraw N200,000 as against the 5 million naira report that was initially stated.

Chidinma said she withdrew the money because the late Michael Ataga had promised to give her some money before he died.

The Bible says you should send women credit alert – Pastor,…

Many men think women are complicated because they…