A 14-year-old has made history by becoming the first African-American to win the US Scripps National Spelling Bee.

Zaila Avant-garde from New Orleans, Louisiana, cruised to victory with the word “murraya”, a type of tropical tree. To get to that point she had to spell out “querimonious” and “solidungulate”.

Zaila Avant-garde saw off a field of 11 finalists on Thursday to win the title and bagged the first-place prize of $50,000 (£36,000) at the event in Orlando, Florida beating 12-year-old Chaitra Thummala of Frisco, Texas in the final round. 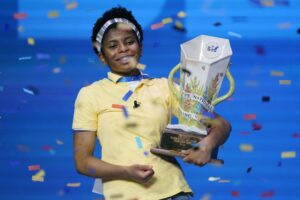 As the confetti rained down on Zaila when her victory was announced, it was clear that she had achieved something truly special.

Zaila is the second black girl to win the tournament – Jody-Anne Maxwell, of Jamaica, was crowned champion in 1998 at the age of 12.

The bee, however, has still been a showcase for spellers of color over the past two decades, with kids of South Asian descent dominating the competition.

Despite practicing for up to seven hours a day, Zalia Avant-garde describes spelling as a side hobby, Zaila’s main focus is on becoming a basketball pro. 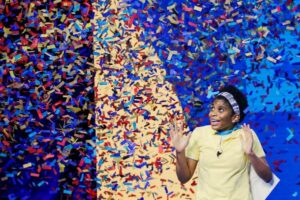 She already holds three world records for dribbling multiple balls at once, and has appeared in an advertisement with the NBA megastar Stephen Curry.

Zaila’s win breaks a streak of at least one Indian-American champion every year since 2008.

It was the first time since 2008 that at least one champion or co-champion of the Scripps National Spelling Bee was not of South Asian descent, the Associated Press news agency reports.

Many top Scripps spellers start competing as young as kindergarten. Zaila only started a few years ago, after her father, Jawara Spacetime, watched the bee on TV and realized his daughter’s affinity for doing complicated math in her head could translate well to spelling. 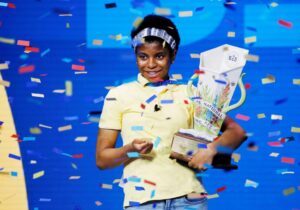 She progressed quickly enough to make it to nationals in 2019 but bowed out in the preliminary rounds.

Zaila resides in Harvey, La., with her parents, Alma Heard and Jawara Spacetime.

Zaila recognized the historical significance of her win, and said that “I’m hoping that in a few years I’ll see a whole lot more African American females, and males too, doing well in the Scripps Spelling Bee,” calling the contest a “gate-opener to being interested in education.”

Olga Okewulonu is a double first class graduate of Law

10 Pre-Wedding Beauty Tips For Brides To Be

Olga Okewulonu is a double first class graduate of Law

#BBNaija: “If many of you had Angel’s confidence you will go…

10 reasons women are hurting in relationships these days

This is why some Nigerian women don’t ask their…