A man has been arrested for allegedly beating his wife to death over her refusal to have sex with him because he was drunk.

The niece of the dead woman narrated the incident while calling for justice for her mother’s twin sister.

According to the niece, the suspect was in the habit of beating his wife. On June 27, the woman, Mrs Ugieki Asemota returned home from a wedding to find her husband drunk, so she had a bath and locked herself in a room to avoid getting beaten which is allegedly her husband’s habit when he’s drunk.

However,  late at night, the husband is said to have banged on her door, demanding sex but she told him to go to his room and leave her alone.

When he wouldn’t leave and she could sense him becoming violent, afraid of what would happen if he eventually enters the room, the wife is said to have jumped out of her room through a window.

However,  the husband allegedly went after her and attacked her, hitting her with wood and a block until she bled and fainted.

She was rushed to the hospital but died last week. The husband has been arrested.

This was what her niece wrote on social media:

Please all we need for my sister Mrs. Ugieki Ovbokhan Asemota is justice.  She’s my Mum’s twin sister and this incident happened Sunday 27th June 2021 after she returned from my brothers wedding.

When she got home, she saw that her husband is drunk as usual because that all he knows how to do drink and beat her. So to avoid trouble, she had her bath, ate and went into her room because she was scared to talk to him so she doesn’t get beaten again. 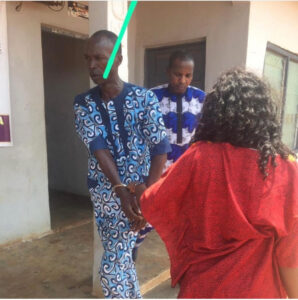 By 11pm, he came with an axe banging on her room door asking her to open the door or he will break the door that he wants to have sex with her. My sister refused in her words I can’t because you are drunk and you are smelling drink please go to your room and leave me alone. He refused and he continued hit the door with the axe. My aunt was scared that if he succeeds in entering the room, he will kill her.

He dragged her down. There was a block beside the window, he hit her head on that block and started beating her. She was pleading that he should leave her alone that she loosing strength but he refused.

The next thing he did was to grab a wood from the backyard and hit on her head and her back (continuously) till she fainted. Blood was coming out from her nose, her ear, and her mouth.

Immediately he saw that she was no longer moving, he stopped, hid the wood and ran away. The neighbours felt no concern because they taught that is their normal daily fight not until one of them came out and saw my sister lying lifeless on the ground that was how they took her to three good hospitals they rejected her. They said she’s almost gone.

One hospital later accepted her. They admitted her and they did so many scans, text, X-rays. They said he damaged almost all her organs and her spinal cord was broken. They said it was 50/50. We prayed fasted yet no positive results. She died yesterday morning.”

10 simple steps that will make your weight loss journey…

The biggest mistake you can ever make in your life is…

BBNaija’s Angel expresses excitement as she pays rent for a…