Miriam Olusanya is the Managing Director of Guaranty Trust Bank. She is the first woman to ever hold that position.

Below are 10 things Nigerian women should know about this inspiring woman:

3. Miriam Olusanya had a short stint in Transactions Services and later moved to the Bank’s Treasury Group in 1999. She managed the local and foreign currency trading desks before becoming the Bank’s Chief Dealer in 2003 and subsequently, Treasurer in 2004.

4. In 2006, she led the team that secured the appointment of the Bank as a Primary Dealer/ Market Maker in Federal Government of Nigeria (FGN) Bonds with the Debt Management Office (DMO).

5. Olusanya, until her appointment was an Executive Director at the bank. 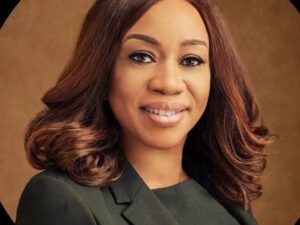 6. She joined GTbank as an Executive Trainee and rose to the position of a General Manager until she was appointed Executive Director.

7. She has over 20 years of banking experience across various units, including Transaction Services, Asset and Liability Management, Financial Markets, Corporate Finance and Investor Relations.

8. Miriam Olusanya also obtained the professional ACI (Association Cambiste Internationale) Dealing certification – The Financial Markets Association. She has attended various courses and Executive programmes at institutions such as the Cranfield School of Management.

9. Miriam Olusanya has been living separately with her husband for some years, and her husband finally sued for divorce in the United States of America (USA).

Meanwhile, the Divorce Paper which was obtained by Brand News Day revealed that the case: “PETITION FOR DISSOLUTION OF MARRIAGE” has Olusanya Abiodun as the plaintiff (husband) and Miriam (wife) as the defendant. The divorce was filed in Lincolnwood, Illinois, United States.

10. Miriam Olusanya’s net worth is unknown at this time.

Iniobong Umoren, who went missing after going for a job…

One year memorial service held for ex-beauty queen and event…

There’s no right or wrong way to grieve