Nigerian actress, Adunni Ade has announced the death of her younger brother simply identified as Douglas.

“No more in pain, sleep well little brother. Know sissy loves you,” she wrote in a post accompanied with a picture of the deceased. 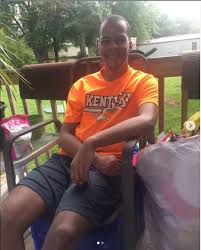 In a follow up post on Wednesday, the movie star shared more pictures of her late brother including one where he was on a hospital bed.

Although the actress did not reveal the cause of her brother’s death, she hinted that he had health challenges before he passed away.

“My Dougie Fresh. Is that Adunni? I love Adunni, I’m going to Africa to meet Adunni, yea yea. I’m just glad you are relieved of all pains. Mom is broken but My God got you! I will always love you, Douglas,” she added.

Colleagues and friends took to the comment section of her Instagram page to pay their condolences over the demise of her brother.

Adunni Ade was born to a Nigerian father and a German-Irish mother. She started her Nollywood career in 2013 when she featured in the movie, ‘You and I’.

Since then, she has established herself as a prominent figure in the Nigerian movie industry.

Adunni has two sons; D’Marion and Ayden. She revealed that after she made a difficult choice to break up with their father, she would continue being a single parent.

Adunni Ade worked in the housing and insurance sectors in the United States before switching to the entertainment industry.

Army corporal accused of groping junior soldier says he was…

Blake Lively Posted Her Pregnancy Photos To Get Paparazzi To…