Mrs. Idiaghagbon Iyere has said that her life is no longer safe while she continues to live under the same roof with her husband, Mr. Kelvin Iyere.

She claimed that the man has turned her to a punching bag: at the slightest provocation, he would unleash his fury on her, leaving her gasping for breath.

She singled out a day in January when her husband threatened to kill her with a gun, put her corpse in his car’s boot and secretly bury her.

She also recalled a day when her husband, whom she said was angry with her, fired a shot in the air as a warning to her that the gun was real and loaded.

According to her, Iyere tore her clothes and dislocated her arm as he dragged her along the floor in their house on June 2.

She also alleged that her husband had sold his conscience to the devil, saying he had beaten her up more than 30 times since they got married.

But the accused, Iyere, countered all the allegations, saying he does not have any issue with anybody. 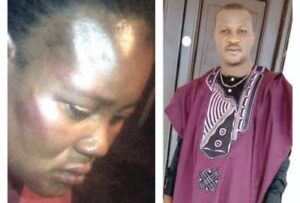 She had claimed that her son-in-law beat her up and threatened she and her children with a gun on February 26 when she tried to prevent him from forcefully taking away his wife, Idiaghagbon, from her home.

But the accused then denied the claims, saying the claims were the handiwork of his enemies.

Iyere had on the telephone on March 11, responding to the allegations, denied ever beating his wife. In fact, he said the allegations were strange to him.

He said: “That is not true. I didn’t beat my wife up and I have never assaulted her. I didn’t beat my mother-in-law too or threaten my wife’s family members with a gun. At the moment, my wife is with me at home and we are living peacefully,” he said.

To authenticate his position, after some minutes, he placed a telephone call to the reporter, telling him that his wife was about to narrate her own side of the story.

His wife concurred with her husband, saying there was peace in her matrimonial home and she didn’t receive any beating from her husband. She said her mother and siblings’ narrative was not true.

Three months after, Iyere’s wife has to run for dear life from her matrimonial home after her husband had allegedly descended on her. She said peace had disappeared from her 14 year old marriage that produced four children.

She said: “He seized all my belongings, saying that he was the one that bought all of them with his money. He vowed that I would leave his house with nothing.”

5 foods you should avoid to look younger

Toke Makinwa decimates Yomi Black for daring her to prove…