What every woman should know about Ovulation Pain (Mittelschmerz)

Ovulation pain is also called “mittelschmerz.” It is pelvic pain that some women have during ovulation.

Ovulation is the part of the menstrual cycle when an ovary releases an egg. Ovulation usually happens about halfway between your periods.

Where does ovulation pain occur?

You typically feel the pain in your lower abdomen and pelvis, in the middle or on one side. You may feel it on the side where the ovary is releasing an egg. (For most people, the ovaries take turns ovulating. Each ovary releases an egg every other month.)

So if the ovary on the right side is releasing the egg, that’s where you will feel the pain. Some people find that the pain switches sides from one cycle to the next. 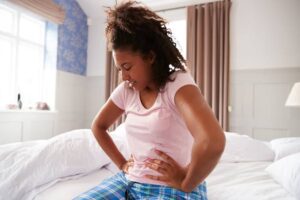 Who gets ovulation pain?

Many women never have pain at ovulation. Others have mid cycle pain every month. They can often tell by the pain that they are ovulating.

Is ovulation pain the same as period pain?

Ovulation pain may feel similar to period pain — like a cramp. But ovulation pain happens about two weeks before you get your period.

How common is it?

Mittelschmerz may affect more than 40% of women who ovulate during their reproductive years — and it can affect them almost every month.

The egg develops in the ovary. As it grows, follicular fluid surrounds it. During ovulation, the ovary releases the egg and fluid, along with some blood. Mittelschmerz may happen because of the egg enlarging in the ovary just before ovulation.

The pain may also be due to a ruptured follicle. The egg bursts from the follicle when it’s ready. The burst may cause some bleeding. The blood and fluid from the ruptured follicle may irritate the lining of the abdomen (peritoneum), causing pain. 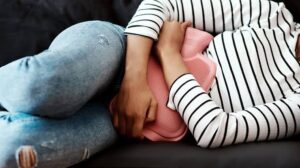 What are the symptoms?

The pain may feel like a mild twinge, or you might have severe discomfort. It often hurts on just one side. The pain can last from a few minutes to a few hours. You may also experience light vaginal bleeding, Nausea (if the pain is bad) and vaginal discharge.

Ovulation pain is normal. It’s one of the side effects of your period. It’s not a sign of a serious health condition. It doesn’t affect fertility, and it can help you become aware of when you ovulate.

How to take care of yourself

Should I worry about it?

Ovulation pain itself is nothing to worry about. But talk to your healthcare provider if you have severe pain. It could be a sign of a different, more serious condition, including:

5 things you shouldn’t say to someone mourning a loved…

Why Nigerian women should quit making excuses for…

Working with special needs children has taught me to never…

Decades of marriage without cheating is impossible says a…