Director-General of the Nigeria Centre for Disease Control (NCDC), Dr Chikwe Ihekweazu has announced that there are 59 suspected cases of Monkeypox with 15 confirmed in the country.

Ihekweazu who disclosed this while reacting to report of a United States resident testing positive for the disease after arriving the North-American country from Nigeria, said an outbreak would be declared when there are large cluster of monkeypox cases that constituted an emergency.

Revealing that the NCDC have been working with state health ministries to strengthen monkeypox disease surveillance and response in the country, Ihekweazu also disclosed that states with the highest number of cases are Delta, Bayelsa, Rivers and Lagos.

The NCDC DG urged Nigerians who feel ill or have a sudden rash, to visit a hospital for diagnosis and management.

Monkeypox virus (MPV) is a double-stranded DNA, zoonotic virus and a species of the genus Orthopoxvirus in the family Poxviridae. 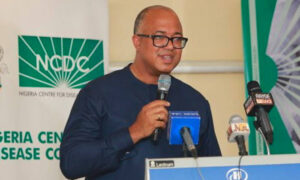 It is one of the human orthopoxviruses that includes variola (VARV), cowpox (CPX), and vaccinia (VACV)  viruses. But it is not a direct ancestor to, nor a direct descendant of, the variola virus which causes smallpox.

Monkeypox virus causes a disease that is similar to smallpox, but with a milder rash and lower death rate. Variation in virulence of the virus has been observed in isolates from Central Africa where strains are more virulent than those from Western Africa.

The virus can spread from human to human by both droplet respiration and contact with fomites from an infected person’s bodily fluids. Incubation period is 10–14 days.

Prodromal symptoms include swelling of lymph nodes, muscle pain, headache, fever, prior to the emergence of the rash.

Husband on the run after Kenya’s Tokyo Olympic star…

Laughing Gas During Labour Is Becoming More Popular Among…