White Money, a businessman who imports and sells shoes, has caught the interest of many Nigerians including former housemate Omashola.

Just few minutes after BBNaija unveiled 11 male housemates, Omashola picked and put his money on White Money as one of the housemates who will make it to the finals of the show.

White Money who promises to be entertaining caught the interest of many Nigerians with his vibes and sparkling personality.

White Money was the 5th housemate who was unveiled on the show last night and Nigerians have started talking about him on various social media platforms. Omashola’s prediction was borne out of the demeanor and vibes White Money, an Igbo born businessman showed when he was unveiled.

He made his pick known on his Instagram story when he streamed live for his fans to also watch as the ceremony was being telecast.

When he was introduced, White Money took time to break down all the businesses he owns and runs, from shoes to beauty products which he co-own with his brother. Clearly, he knows his way around business.

The housemate revealed a surprising aspect of his life to the fans of Big Brother Naija when he said he got a scholarship through drumming.

Hazel Oyeze Onou aka White Money is one of the Big Brother Naija Season 6 “Shine Ya Eye” housemates who came into the limelight following his participation in the reality show when it hit the screen on July 24th, 2021. 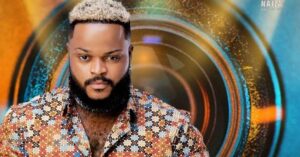 White Money describes himself as an open-minded “jolly pleasant person” who enjoys having a good time. Driving, hustling, watching movies, and making music are some of his favorite pastimes.

The 29-year-old Enugu State-born businessman and entrepreneur says he has a strong aura and his “swag speaks for itself.”

White Money who is down to earth but strategic, is optimistic that his positive view on life will carry him far.

He wants to amuse, have fun and potentially win the grand prize while in the Big Brother Naija house.

Bauchi woman and her teenage daughter arrested for allegedly…

Woman with 7 husbands narrates how she manages and satisfies…