Justice Binta Nyako of the Federal High Court, Abuja has adjourned the trial of the leader of the Indigenous People of Biafra (IPOB), Nnamdi Kanu to October 21, following the failure of the Department of State Security DSS to produce him in court today July 26.

When the matter was called up, Justice Binta Nyako said nothing could be done since the defendant, Nnamdi Kanu, wasn’t produced in court by the DSS.

According to the prosecution counsel, Mohammed Abubakar, Kanu was not in court due to logistic reasons. 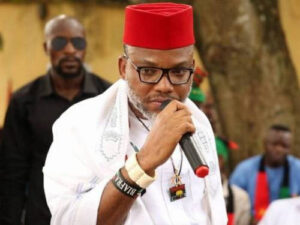 Justice Nyako then adjourned the case till October 21 but said the date could be brought back if the prosecution was able to obtain a fiat from the court’s Chief Judge to allow proceedings during the ongoing vacation of the court.

Kanu is standing charges bordering on terrorism, treasonable felony, unlawful possession of firearms, and management of an unlawful society.

Supporters of the leader of the Indigenous People of Biafra, IPOB, Mazi Nnamdi Kanu, have asked the federal government to release him.

Their demand came minutes after they were dispersed by the officers of the Nigerian Police force at the Abuja High Court.

Kanu is being tried for treasonable felony. It was alleged that he jumped bail and travelled outside the country.

The IPOB leader was re-arrested in Kenya and was extradited to Nigeria.

Reacting after they were dispersed, Kanu’s supporters opined:  “We are not afraid. We are behind Nnamdi Kanu.

“Whatever they want to do to us, let them do it. We have come here to witness and support our leader Mazi Kanu.

“We are behind him in the morning, afternoon and night. God almighty is solidly behind us. We are not afraid of anybody.

“We are worshiping a living God and he will facilitate Kanu’s release.”

10 things your man will start doing right before he breaks…

Married men must date single ladies to teach them about…