The wrestler, 36, enjoyed a day in the tropical Floridian sunshine with his athlete and fitness model wife Galina Becker, 34.

The sportsman showed off his toned torso and intricate body art across his right shoulder and arm as he went for a swim in the ocean with Galina, who sizzled in a colourful swimsuit. 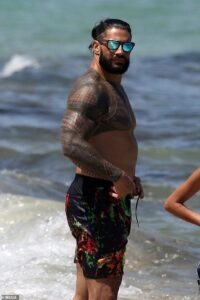 He could be seen with his long black hair tied up behind his head as he stood on the white sand.

The star looked on from behind his mirrored sunglasses as Galina went for a dip to cool off from the summer heat. 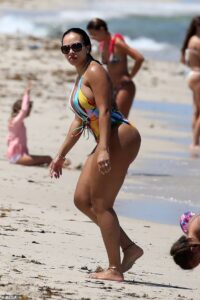 Galina showcased her ample assets and peachy posterior in her high-cut swimsuit as she soaked up the sun.

Her hair was tied back in a plait and she wore sunglasses to protect herself from the bright daylight during the couple’s downtime together. 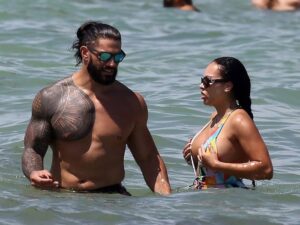 He announced he and Galina were expecting in April 2020 while speaking to Muscle & Fitness about his family life, saying: ‘Three, with two in the oven!

So I’m looking to be Papa Bear Five! Breaking news, we haven’t really shared that.’

The happy news comes just weeks after the wrestler – who returned to WWE in February 2019 when his leukemia went into remission following a second battle with the disease – pulled out of WrestleMania 36. 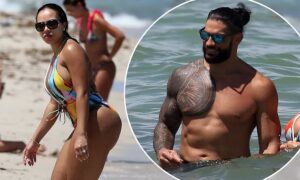 Although there was speculation his decision to drop out of his Universal Championship match with Goldberg was down to his own health, Roman revealed that there was more to it than that.

Roman Reigns is one of the highest-paid athletes in the WWE, as the company has constantly made efforts to promote him as the face of the company. He earns an annual salary of approximately $1.2 million & above.

This is subject to additional bonuses and winnings. As a gross figure, his take-home salary ends up in a figure which is in close proximity of $2 million. His salary has seen an increasing trend. His net worth is about 13 million dollars in 2021.

“I’m scared of marriage, I’m willing to date for 10years before I get married.” –…

#BBNaija: “If many of you had Angel’s confidence you will go naked” – Blessing Okoro…

Bad habits that damage your hair

Sharon Stone reveals why she may quit acting at 63

Dear Nigerians, allow people live their lives and live yours