Veteran actress, Rachel Oniga has died at the age of 64. She died on Friday night July 30th from COVID-19 complications.

According to reports, the actress who has been divorced from her husband for 19 years was actively shooting movie scenes until she breathe her last.

Oniga is said to have shot some scenes in a movie at Mowe, Ogun state earlier this week before her death. The full details about what happened to her are still sketchy at the time of filing this report.

A Facebook user Olusegun Oshiyoye, who penned down a heartfelt tribute to the late actress described Rachel Oniga as his aunt.

Our last conversation was not like this…Your memories will never be forgotten Mummy Olamiji…Continue to rest in peace.

The Lagos State chairman of the Actors Guild of Nigeria (AGN), Emeka Rising, confirmed the news in a telephone interview with PREMIUM TIMES Saturday morning.

He said, “We just got the news early morning today. We have nothing to say than to give glory to God for a life well spent.”

“I got the news this morning, I have been down and surprised.” 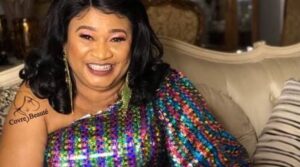 Originally from Eku, Delta State in Nigeria, Rachel Oniga was born on 23 May 1957 in Ebute Metta, Lagos.

She began her acting career in 1993, shortly after her divorce. She worked briefly at Ascoline Nigeria Limited, a Dutch Consultant Company before her first movie titled Onome and her debut Yoruba movie was Owo Blow.

Over the years, Rachel Oniga has featured in notable Nigerian films such as Sango, a movie scripted by Wale Ogunyemi which was produced and directed by Obafemi Lasode.

My violent ex-husband almost killed me after we separated