Women and girls in Afghanistan have been warned by the Taliban  to stay at home, admitting they were not safe in the presence of the militant group’s soldiers.

According to Taliban spokesperson, Zabiullah Mujahid, women should not go to work for their own safety a clear shift in the group’s messaging, as they earlier promised to be more open to women’s rights and freedoms after taking over power in Kabul.

Mujahid said the guidance to stay at home would be temporary, and would allow the group to find ways to ensure that women are not “treated in a disrespectful way” or “God forbid, hurt.”

He admitted the measure was necessary because the Taliban’s soldiers “keep changing and are not trained.”

“We are happy for them to enter the buildings but we want to make sure they do not face any worries,” he said. 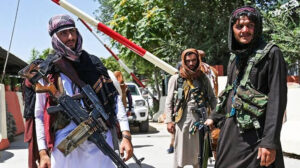 “Therefore, we have asked them to take time off from work until the situation gets back to a normal order and women related procedures are in place, then they can return to their jobs once it’s announced.”

When last in power between 1996 and 2001 the militant group banned women from the workplace, stopped them from leaving the home except they are accompanied by men and forced them to cover their entire bodies.

Mariam Wardak, an advocate and former senior Afghan government official, pointed out that for traditional, religious, and cultural reasons, in many parts of Afghanistan “there is a resistance for women to speak out, for women to hold a certain structure in our society.”

Zahra Nader, a journalist and PhD student from Afghanistan who’s based in Canada, said the US talked about “saving Afghan women from misogynist forces, this gender apartheid.”

She attended the university in Kabul — an opportunity she recognizes that many other Afghan women did not have.

20-yr-old girl arrested for hiring assassins to ki.ll her ex for ending their relationship

Dear deadbeat fathers, if you don’t take care of your…

I take permission from my parents to go out these days…

Stop feeling inadequate if you haven’t made it yet

”There’s so much good that can come from having a…