The Edo State Police Command have arrested a 21-year-old nanny, Precious Mmaduike, who allegedly kidnapped her boss’ children in Lagos and took them to Benin City, Edo State.

The suspect was arrested alongside two others on Thursday, August 26, 2021, three days after she abducted the kids from their residence in Surulere area of Lagos.

The other suspects are identified as Jane Osas, 35, and 45-year-old John Obasu.

The command’s spokesperson, Kontongs Bello, in a statement said, “The abduction was planned and executed by their housemaid.

Precious Mmaduike, used her familiarity with the children as househelp and abducted them from Lagos to Benin City, Edo state. 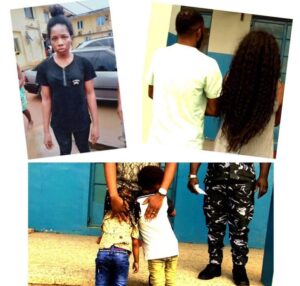 The father of the children said they were given N500 by his wife to buy biscuits outside the compound in the company of the nanny, but failed to return. He said the phone of the nanny was later switched off and efforts to find the children proved abortive.

The father reported the situation to the Aguda police station in Lagos, where it was discovered that the last location of the nanny before she switched off her mobile phone was Benin city, Edo state.

With the aid of the information gathered from the origin of the abduction and field assets, the abducted children were rescued on 26/08/2021 at about 1730hrs by the operatives of the Edo State Police Command, Benin city, in a very remote area at Upper Ekewan road, Benin City, with the housemaid and a woman she came to visit with the children.

The housemaid who met the woman on the internet claimed that the two children belonged to her and they came to Benin city for visit, but unknown to the woman, the children are not hers and are not related to her.

The woman had bought some gift items and other properties for the children and is currently with the police.”

25-year-old man claims his ‘sugar mummy’ threatened to c.u.t his manhood because he refused to have sex with her

Cheating women are moved by sight as well as words

Women don’t exist to please men, raise them or fix…

“In this marriage, there is no head of house, no…