Last night, Annie in a now-deleted post called out her husband, singer Tuface Idibia, for sleeping in the same house with his baby mama, Pero Osayemi, while he went to see his children.

”Any woman that calls you out online is a wrong woman no matter what because a GOD fearing woman with home training will understand that this space is just like a market square. NDI ala NDI ala” 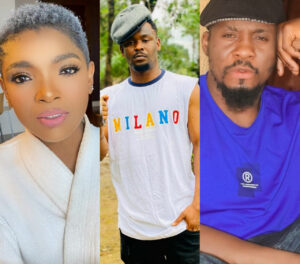 Junior Pope on his part wrote

”No Marriage Wahala Brought To Social Media Has Ever Gotten Resolved Amicably..Instead it is the begining of the END….Take your marriage issues to your parents/ marriage counsellors….NEVER ON SOCIAL MEDIA”

On different social media platforms, Nigerians have been reacting differently to the posts Annie Idibia made about her husband Tuface and his family members bleeding him dry.

May my sisters, my friends or my relative never ever marry toxic men like this. They left the infidelity issue to deflect with ‘bringing it online’. This is the behaviour of majority of Nigerians. Very manipulative. So the man who was sleeping in the same place as his ex has good home training abi? People express differently. It is her problem, her social media and her voice. It will also be her consequence, whatever comes out of it. Fucking enabling men.

When you have used up all your options. Have tried all things possible and you find yourself in a marriage that is as good as rubbish to you. Social media can be the only option. Zuby look like someone that will not have respect for women. Look at how Pope subtly criticized her and Zuby have to go all the way to call her untrained girl. When Innocent was impregnating women, was he trained?

Boyfriend Allegedly Shoots Woman Dead after she tried to end…

Project Alert makes case for women living with disability in…

No matter how much you miss a toxic person, don’t…