Actress Nkechi Blessing Sunday has questionned why couples bring their “dirty linen” to social media for “people who do not give a hoot about them”.

According to Nkechi, she will never put out anything bad about her relationship on social media no matter how bad she’s being pushed to.

She shared her opinion on her Instagram page, hours after her colleague, Annie Idibia, called out her husband, 2face and his family on her Instastories.

“E no go better for the person wey turn this social media to law court, where couples bring their dirty linen for people who do not give a hoot about them to have a say in what goes down behind close doors, like the person no go die better.

No matter how pushed I am, you ain’t hearing jack shit from me, I take my L and move the F**K on. 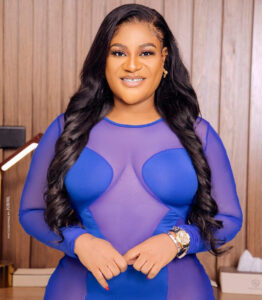 God forbid**This evil app that the devil has hijacked is making marriage look like a bad thing, I refuse to allow an app that can be deleted tomorrow take the better part of my life, Never X.”

She is an American based Nigerian Actor, Film Producer, Film director, and Writer who was born and raised in Surulere, Lagos State.

In 2020, Nkechi Blessing co-hosted the 2020 edition of the African Entertainment Awards USA with Seun Sean Jimoh. She was in the cast of Fate of Alakada as the character of Bisi.

She also serves as the Director and Chief Executive Officer of Nkechi films production, and NBS Foundation.

Nkechi Blessing Sunday has a two year old son called King Elijah Success who is popularly known as Novah Success. The little boy has a huge number of followers on social media and has already an ambassadorial deal.

‘Stop being bitter, be better’ Media…