You rubbished the first man you married, you think you can play same game with me – Kpokpogri shades Tonto Dikeh

Prince Kpokpogri has gone on an Instagram live session to throw an epic shade at his ex-lover, Tonto Dikeh.

Kpokpogri claimed the single mother-of-one is trying to do to him what she did to her ex-husband, Olakunle Churchill.

“A woman, you rubbished the first man you married, you think you can play the same game with me.” 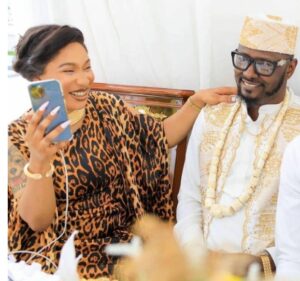 “You went to go and park my Lexus, a car that I bought 67 million, in your compound, feeling that you’re bigger than the law.

“If you’re bigger than the law then me, I will equally break the law.”

He also refuted allegations that he was arrested by the DSS after Tonto Dikeh filed a petition against him.

Last week, an audio recording was leaked to social media and people could hear Tonto pleading with Prince Kpokpogri to take her back after she cheated on him barely three weeks into their relationship.

While Tonto Dikeh didn’t debunk the authenticity of that audio, she revealed that it was an old audio recording, and stated that she eventually ended the relationship.

Some Nigerians then fingered her Prince Kpokpogri as the one who leaked the recordings and they lampooned him on different social media platforms.

In his reaction, Prince Kpokpogri has denied taking such a brutal action, and he seemingly accused Tonto of leaking the audio herself.

I don’t have much to say about the tape I know how dramatic you are more than others people should read themselves who is behind the leak voice with her verified page.

He then went ahead to share a screenshot that showed an alleged verified account of Tonto calling herself a silent killer, and calling him a confirmed Illiterate.

There seems to be no end in sight for this social media drama between Tonto Dikeh and Prince Kpokpogri.

“In this marriage, there is no head of house, no subordinates” reveals Blessing Mary Ocheido

Side chic pours h.o.t water on housewife while she was sleeping

10 reasons you are not losing weight even after cutting…

10 benefits of skipping that will improve your health