Nollywood actress, Nkechi Blessing, has opened up on how a sister set her up with her boyfriend to confirm if she was a virgin.

She made the revelation in an interview with Chude Jideonwo.

Nkechi Blessing averred that her experience was the reason she felt strongly about the Baba Ijesha rape saga.

She recalled how at age 16 or 17, her older sibling didn’t believe she was a virgin because she was weird. 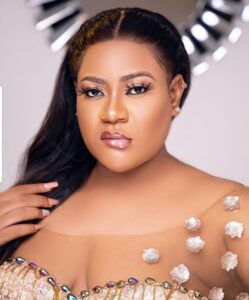 She said though her mother had a beer parlour then, she was so strict that her kids dare not mess around.

“She (sister) invited me out with her boyfriend. I was cool with it but then it started to seem as though she wanted to set me up with her boyfriend to confirm if I was still a virgin or not. They brought drinks and I drank them. She stood up, left, and said she would be back.

The guy stood up and sat beside me. My mind immediately went to the fact that my mother didn’t believe I was a virgin. I was scared to death but I knew I needed to do something. Next thing, I summed up the courage to leave and the guy held me down and said ‘you’re not going anywhere’. Then, I asked him, ‘uncle, you wan rape me?’ This statement startled him and then he let me go”, she said.

The actress/entrepreneur was signed alongside other Nigerian entertainers including Antar Laniyan, Adeolu Funsho, Jigan Baba Oja and others.

Nkechi took to her Instagram page to announce her new ambassadorial deal with the lottery brand and the mouthwatering benefits the deal has to offer.

Sharing a photo of herself in the brand’s customized Tshirt and Face Cap, she wrote,

I mean I couldn’t resist the offer when I heard that all my followers will become millionaires too with shikini money. So therefore ya all kindly do me a favor and celebrate my new family with me @officialnairamillion.”

“I’m scared of marriage, I’m willing to date for 10years before I get married.” – Nini

“For every lie against you, karma is real” – Actress, Annie Idibia writes as she celebrates her mum