Woman attempted s.u.i.c.id.e because her family wants her to go back to her abusive husband

A Nigerian woman is recuperating after attempting suicide because her family is making life difficult for her after she left an abusive marriage.

“A Facebook friend attempted su.i.c.i.d.e on Friday because her family continuously blamed her for leaving her abusive marriage.

I called her younger brother after she was rushed to the hospital and instead of showing concern, he kept blaming his sister, calling her unprintable names whilst praising the abuser.

An unproductive call that left a sour taste in my mouth.

He ended the call saying if she doesn’t go back to her ex-husband she is doomed because they all depend on him.

The whole family sold their conscience because of money,ex- husband is a money bag, and opportunity control their loyalty. 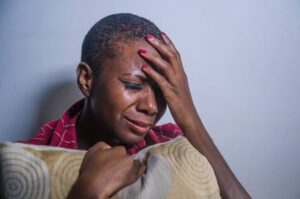 Special shout out to the person who helped rescue her on time, and took her son in. She was almost gone.

This is the second case of attempted su.i.c.i.d.e this month with the family acting aloof.

Please, when your sister / brother leave that abusive marriage, don’t make life difficult for them with the blame game, and lack of support.

Money will finish, opportunity can also fizzle out with time, but broken bonds from lack of loyalty is always hard to fix.

To friends of persons fleeing such marriages, If you can’t support them, please don’t condemn them.

This is so sad. Why do some families prefer to have d.e.a.d daughters rather than daughters who ran away from their abusive husbands?

What kind of family members would prefer their daughter and sister d.i.e at the hands of an abusive husband because they are benefitting from him financially?

My heart goes out to the poor woman who instead of getting respite and love from her family has been frustrated to the point of taking her own life.

Simone Biles Pulled Out Of Gymnastics Finals Due To Mental…

10 Pre-Wedding Beauty Tips For Brides To Be