Interior decorator, Ehi Ogbebor unveiled her new man after he celebrated his 50th birthday yesterday October 9 in the United States.

Ehi Ogbebor who stated that they are two “divorced souls” madly in love, added that anyone claiming to be married to her new man should provide evidence or forever hold their peace. She also warned her new man’s “ex-wife” not to push her into spilling all she did while they were married. The interior decorator averred that she is too peaceful and mature for that.

Ehi has been married twice, and had said earlier this year that she will give marriage another chance if the right man comes.

In another Instagram exchange with a follower, she stated that her new man has a divorce certificate and has been separated from his wife since 2018 before they even met. 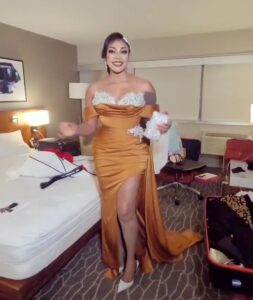 “Sad u are actually bringing the kids into this to gain sympathy… This man left u for reasons u both know in 2018.. I met him 2 years after while your divorce was on already… he has probably dated other women b4 we met …why nah my own dey pain u… I didn’t even know him while u guys were battling in court….tarnishing my image to make yourself look good won’t help u..why not tell the world why he walked out of your marriage… this is my last comment on this.. u n the evil blog keep deceiving gullible people”.

“Thanks to the over 400 people Everyone that came to celebrate In my married man boyfriend birthday party n rejoiced with us. God bless you all. And take u back safely…. If u are married to this man in this video n don’t have evidence. It high time u hold your peace.. don’t make me talk or post evidence n all u did while married. Am too peaceful n mature for that. Don’t push me o. U don’t know the worth until it’s gone. Selling lies to the bloggers won’t do jack. Two divorced souls madly in love.”

Is Busola Dakolo the first woman to be raped, she should let…

Many Nigerian marriages are endurance marriages, not happy…